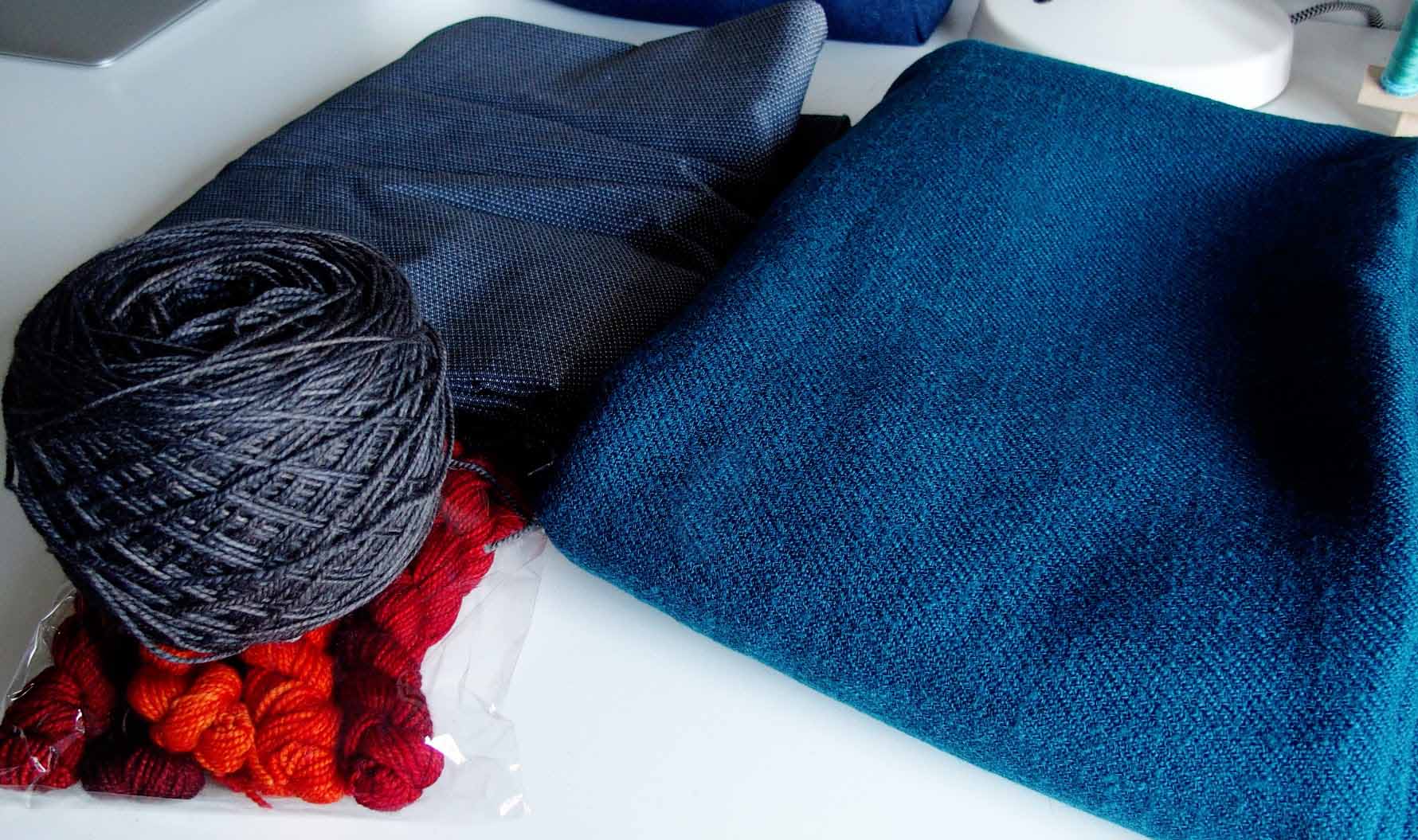 Now that the sewing room re-do is almost complete (once I get the final furniture pieces I’ll post proper photos here) – I’ve got a tidy and very clean work space to inspire me again. And one of the things I am most happy about in the new configuration is a table that I can stand upright at for cutting out patterns. Back when I lived on the Sunshine Coast I had this set-up (I lived on my own in 1700 square feet so there was plenty of space) but for the last several years I have made do with the dining room table. As I have increasingly made garments in the past few years, it means hauling yards of fabric into the dining room, pinning, and cutting – while trying not to disrupt the use of the space or dinner being served! A dedicated cutting and work table feels like real privilege to me.

I finished the dorm room quilt on Monday (it was delivered the next afternoon), and by Tuesday night I was hauling out fabric and yarn for new projects – I took the photo above after I had decided on my makes: 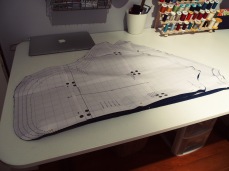 The Woodland Stroll Cape has been in my project queue for about two years- and I’m still not sure about the making of it. I have had a piece of vintage teal wool in mind for this project sitting in my closet for ages – but capes make me hesitant. I love the idea of a cape for fall wear, but I’m not sure about how practical it is, and I worry that I will look like I am wearing a blanket. I don’t have enough of the wool to make a jacket or coat, however, and I can’t really imagine a skirt this scratchy – so I’ve decided to commit to the idea in my head, and just see how it goes. I taped the pattern together and cut it out on Tuesday, and then yesterday picked up a lining and findings for it on my lunch break. 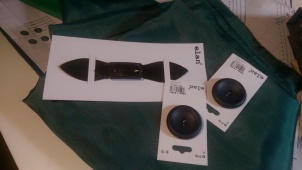 I’m pretty committed at this point, and I do like the fact that the side buttons do provide some minimal shaping (unlike lots of capes and ponchos which just billow around). I chose to start this one first because it seemed the most straight forward and also, there is a short window for wearing such a garment. Once it gets cold and wet, it won’t be nearly enough to keep the elements at bay. This strikes me as much more an autumn garment, which means it has to get done before autumn is over.

My next project following up on that is the Cappuccino Dress, also by Liesl + co. I have now made this pattern twice – once as a dress and once as a blouse – and I have to confess, it’s a bit shapeless for me. On the other hand, I wear the dress version of it all the time at home. It make a great house dress with big pockets for holding things, and a very comfy garment for meditation. Because I am heading to a week-long meditation retreat in November, in a place that is often quite chilly, I’ve decided to make a version in black chambray that I can layer a long sleeve shirt and leggings under. Definitely not a garment with a lot of sex appeal, but truly a very practical item – which is I suppose what meditation garments should be – a bit boring but wearable. This pattern is a dream to follow and I’ve already transferred it to swedish tracing paper, so I expect a quick make (in time for the start of an intensified fall meditation period).

And finally, the Beacon Shawl – which I fell in love with as soon as I saw a picture of it. As a new knitter, I figured it would be something straightforward that I could probably make, and so I ordered the yarn mid-summer. Because I had two (or more) other projects on needles at the time, I’ve been patiently waiting to break out the pattern and start knitting. On Monday night, alongside my quilt finish, I also managed to finish Brian’s winter scarf project which I finally handed to him this morning after unpinning it from blocking: 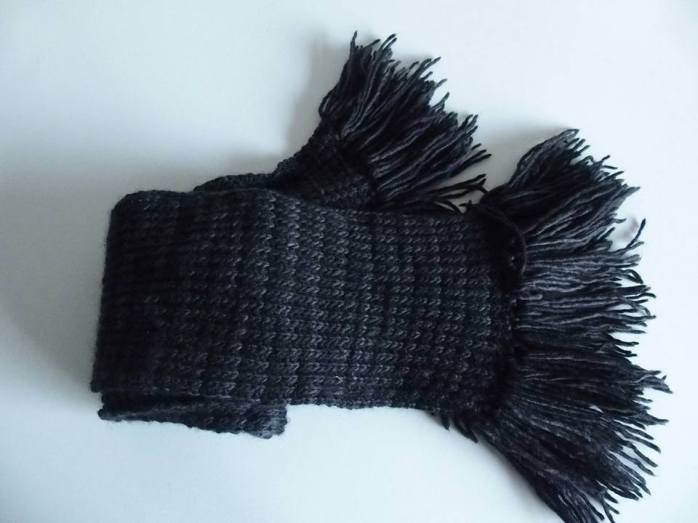 The Beacon Shawl was cast-on Tuesday, and it’s my current “bus” knitting project – something small enough that I can knit it in transit (unlike the sweater I am in the middle of). I don’t have much to show at the moment, so that will wait for another day, but I’m happy to have something new on the needles.

My afterwork plan for tonight is a drink with workmates and then straight home to work on the cape – once that’s underway, I’ll cut out the dress. And then after that I’m thinking about Purl Soho’s Quilted Vest and a new skirt – but that’s getting far too ahead of myself and I have unfinished objects that are calling me too.

Every Tuesday I go for a walk with a friend and for the last several weeks she has brought me #asparagus from her garden. I think this week might be the last of it so I made a simple tart for dinner to honour this most excellent spring treat. #localharvest #icookmyownfood #superyum
First of the season strawberries from @watercliffpermaculturefarm with fresh made greek yogurt for the win. #bestdessert
Ah! The satisfaction of a new pair of pants fresh off the sewing machine. #sewhouseseven #freerangeslacks is my current favourite pants pattern now that I have modded it to fit me well. #modafabrics #borowovens line was the perfect choice for a pair of lightweight pants for summer. Thanks to @spoolofthread for carrying such great garment fabrics lately! I need more of these! #memademay2020 #isewmyownclothes #sewistsifinstagram #diywardrobe #stayhomeandsew #sewinginreallife #sewingbasics
This might well be the finest batch of rhubarb ketchup I have ever made. Last year's canned tomatoes and this year's rhubarb from #gabriolaisland farmers. #canning #bcfarmersmarket #rhubarb #steamcanning
Haven't posted a #memademay2020 selfie since last week. Not that I haven't been wearing me-made things but I don't have a big wardrobe of stuff at the moment so it gets a bit boring. Today I'm wearing a pair of #closetcasepatterns #pietrapants in light denim and a #unionsttee that I sewed out of fifty cents of dark purple cotton jersey that I bought at the #gabriolaisland recycling org (GIRO) a few months ago. I need some new clothes but I've lost my sewjo a bit lately. Once the nice weather comes I don't like being in my studio as much! #isewmyownclothes #stayhomeandsew #sewinginreallife #sewistsofinstagram #memademay #diywardrobe
More bread experiments. Today I baked a sourdough sandwich loaf which I believed I didn't have to score denser crumb, less springy dough, baked in a loaf pan). Not so! It split itself instead. But no matter, because it still made an excellent fried egg sandwich for lunch.
%d bloggers like this: