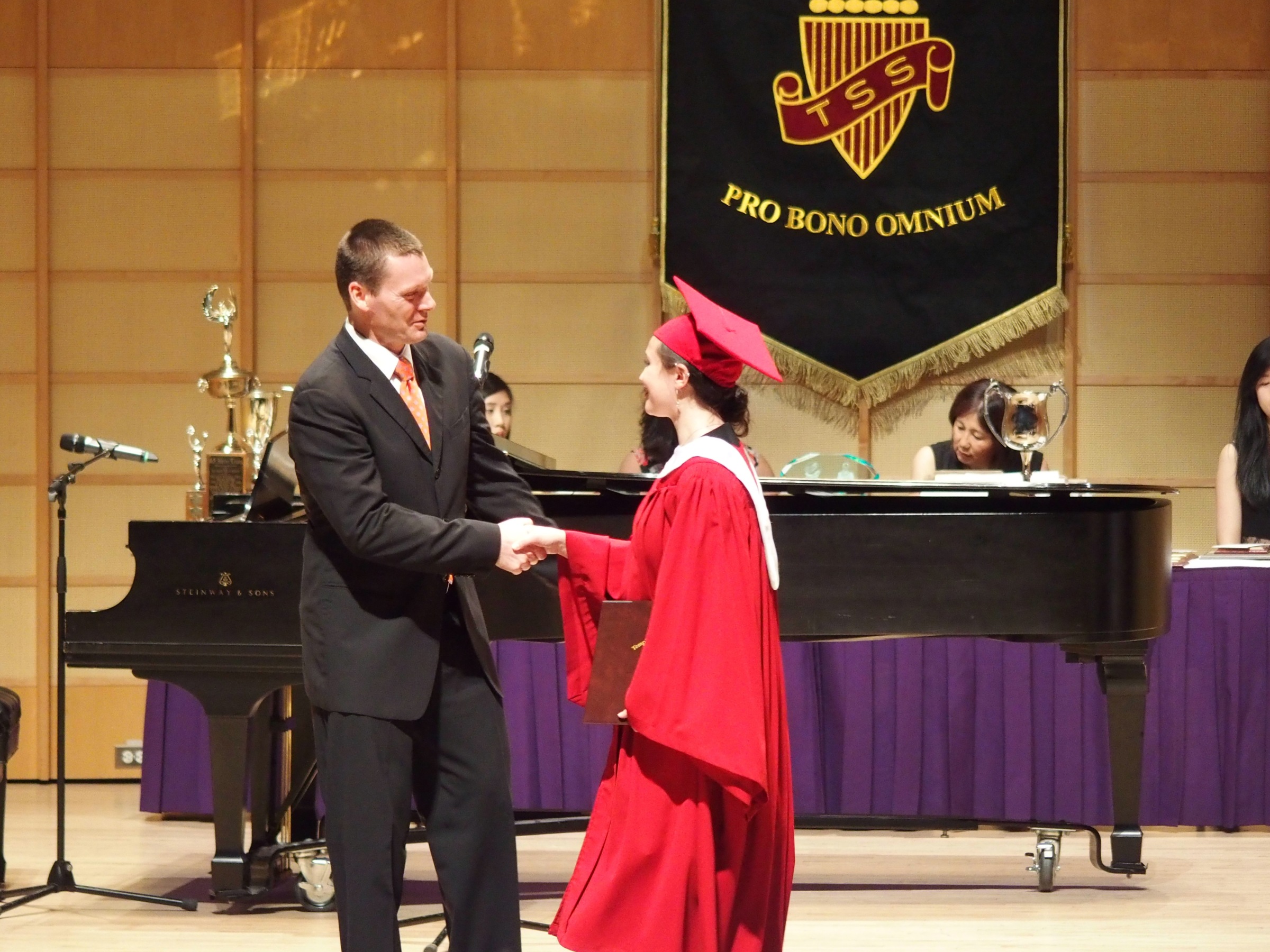 My step-daughter M. graduated from high school yesterday, which coincidentally was also the day that I was supposed to graduate from my Master’s program (scheduling conflicts mean that I will convocate in the fall instead). I surprised myself by feeling both overwhelming proud of M. and also a little bit sad for myself because although I am a grown up and can delay the satisfaction of graduating, I’m afraid that I will be doing it on my own because my friends all went up yesterday. And then I wonder, at this stage of the game how much the cap and gown thing matters anyway. When you leave high school, that graduation is such a big deal – it signifies a whole shift in life and expectations, the beginnings of adulthood, a move away from what is familiar towards unknown (exciting and terrifying) things. An undergrad degree denotes a similar shift – to the world of work, away from the supporting pillars of school life and financial aid, to being taken more seriously (or not). These are big life things, and so we mark them with pomp and circumstance (literally, they played that at M’s grad ceremony yesterday), awards and speeches.

But twenty years into this adult thing, completing a degree is just one more thing you do – for fun or work reasons – and you don’t really expect anyone to get all that excited about it (except my partner, he gets plenty excited and I love him for it).

All that aside, I find myself with a lot of emotions this week – triggered by this whole grad from high school that we marked yesterday. I am so interested to see what M. does next, curious about her way in the world, anticipating her discoveries as she moves into residence at the university in the fall and starts her own academic path. On the other hand, I can’t help but reflect on how different she and I are, how much easier a person she is in the world than I was at her age, how challenged I was upon graduation – how unhappy my life was for many years after that. Yesterday when we drove to the ceremony I told my partner that whatever she does, I don’t really care, but that I hope she can find her way to a happy life. And by that I meant, find her way to a happy life a lot sooner than I did.

Because for some reason I felt like the struggle against myself and everyone else was essential to who I was – anger, sadness, distance were all too familiar in my life to that point. I believed that I was marked for distress and depression and that those things were the *real* whereas any focus on joy or beauty was somehow artificial. And as one does, I reinforced those feelings with drugs and alcohol and sex and low-paying work – until they were all that was true about who I was going to be.

Fortunately, I have a strong life wish – it turns out – so strong that even this delusional state couldn’t keep me from finding things to be interested in. Mostly that interest turned around how I could get a job that paid more than minimum wage – which seems shallow – but it’s what propelled me into college, and then to the city and university. The beaten-down character of my own experiences made me rage for social justice and so I found actual things to focus my anger on (rather than myself). And so rather than fizzling out young, I spent my twenties and much of my thirties fighting the world and healing myself – though it was mostly fighting and not enough healing – growing my capacity for life bit by bit as I advanced along my path. I got the degree and a good job, I played fiddle in a band, and got into long-distance hiking, I bought my first house on my own and learned how to drive, I fought with the police and I got a good therapist, and sometimes I even felt like I was starting to “get it” – which was a long way from where I started on my path to adulthood.

And now I am 42, having learned that it is possible to turn towards joy rather than away from it. Which sounds crazy right? Because who would turn away from joy when it appeared? But we do it when we don’t know any better – and it took me a long time to know better about my worth in the world and my capacity for love. Which doesn’t mean that I have no sorrows, but that I am learning to accept each feeling as transitory – the good and the bad – which makes the world a much easier place for me.

It’s all this which I reflect on as I watch M. grow up, seventeen years old now, thirty in the blink of an eye. She has none of the edges that I did at her age, for which I am glad, but I wonder what *is* programmed in her (by her parents, by society, by media) that will impede her road to a happier life. I wonder if she will (mercifully) figure it out earlier than I did, than her father did. And I hope so much that she *can* get to it sooner rather than later so she can enjoy more of a life with grace rather than resistance. What she does in terms of work, love, children – doesn’t matter so much to me as how she *is* in the world.

But then, it’s our struggles for and against these tendencies which make us whole – and it’s the work of our lives to become fully human. I want an easier time for her of course, but too easy and she might miss the lessons of the journey altogether. I look at her and wish that at seventeen I was as possessed and confident as she is, but I also know that my hardships have brought me into a brighter life than I ever expected possible.

It’s remarkable, these milestones, and what they uncover in us – one by one.

Finished Module 2 of the @maiwaschooloftextiles #printandpaintwithnaturaldyes course last night. ⁠
Excitement in the dye studio this morning when I lifted these test pieces out of their pots and discovered how well the dye adhered to the painted and stamped mordant on the cotton fabric! Dyed with buckthorn (yellow) and cutch (brown) - I'll be interested to see what these look like when dry. On Sunday I plan to dye the "finished" pieces from this @maiwaschooloftextiles #printandpaintwithnaturaldyes module, which have been painted and stamped with mordant already... and will share more process pictures when I'm done!
Some of my printing blocks for Module 2 of the @maiwaschooloftextiles class I am taking. I am excited to show results after I have finished this process later this week! #maiwasupply #maiwaworkshop #maiwaschooloftextiles #printandpaintwithnaturaldyes #textileprocess #textilestudio
The canning kitchen is getting another workout today. This outdoor set up really was a fantastic investment, especially loving it on the mild fall days. #canningseason #foodpreserving #Canning #pressurecanning #foodsecurity #fillingthepantry
For the first time in three years I stepped into the Wall Street Zendo this morning. I showed up in person to practice with my #zencommunity and deliver a talk on what brought me to Zen practice. It was a deeply moving morning of reflection and kinship for me, a reminder of how much we need each other on our path through this lifetime. #zenbuddhism #spirituallife
Made myself a surface for textile printing as per the instructions from @maiwaschooloftextiles out of a piece of scrap plywood, an old yoga mat, some canvas that used to cover a futon, and an old bedsheet. Very happy with how it turned out. This is probably the last day it will be this clean.
This is the single full-sized plum that grew on my very young multi-grafted plum tree this year. It's a Brooks (a variety of prune plum) and I can attest that it was very tasty. ⁠
My pile of fabrics from Tuesday has been scoured, dried, ironed, and divided according to the course modules set out by @maiwaschooloftextiles. My weekend project is to build a printing surface out of some plywood and an old yoga mat! ⁠
Getting ready to scour all my fabric for the online course I am starting this week with @maiwaschooloftextiles. Soda ash and syntrapol in the washing machine on repeated agitate and soaking cycles should do it!
Last weekend I picked arbutus bark off the ground, and then I begged some calendula off a friend. Both are now soaking in apricot oil, with the intention of making some skin salve later this winter. ⁠
On Wednesday I signed up and paid for a week long meditation retreat with my sangha in November. This will be the first such silent retreat for me in three years (the last one being November of 2019 before the pandemic). I am nervous after such a long hiatus from intensive practice, but also looking forward to seeing that part of my community again so much - including Norman Fischer, the head teacher in the North American lineage of our branch of #sotozen. ⁠
September #fullmoon #hightide swim at #malaspinagalleries - cold at first but blissful after a swim across the bay and back with @flux_foto and @kravitzsharon
Join 378 other followers