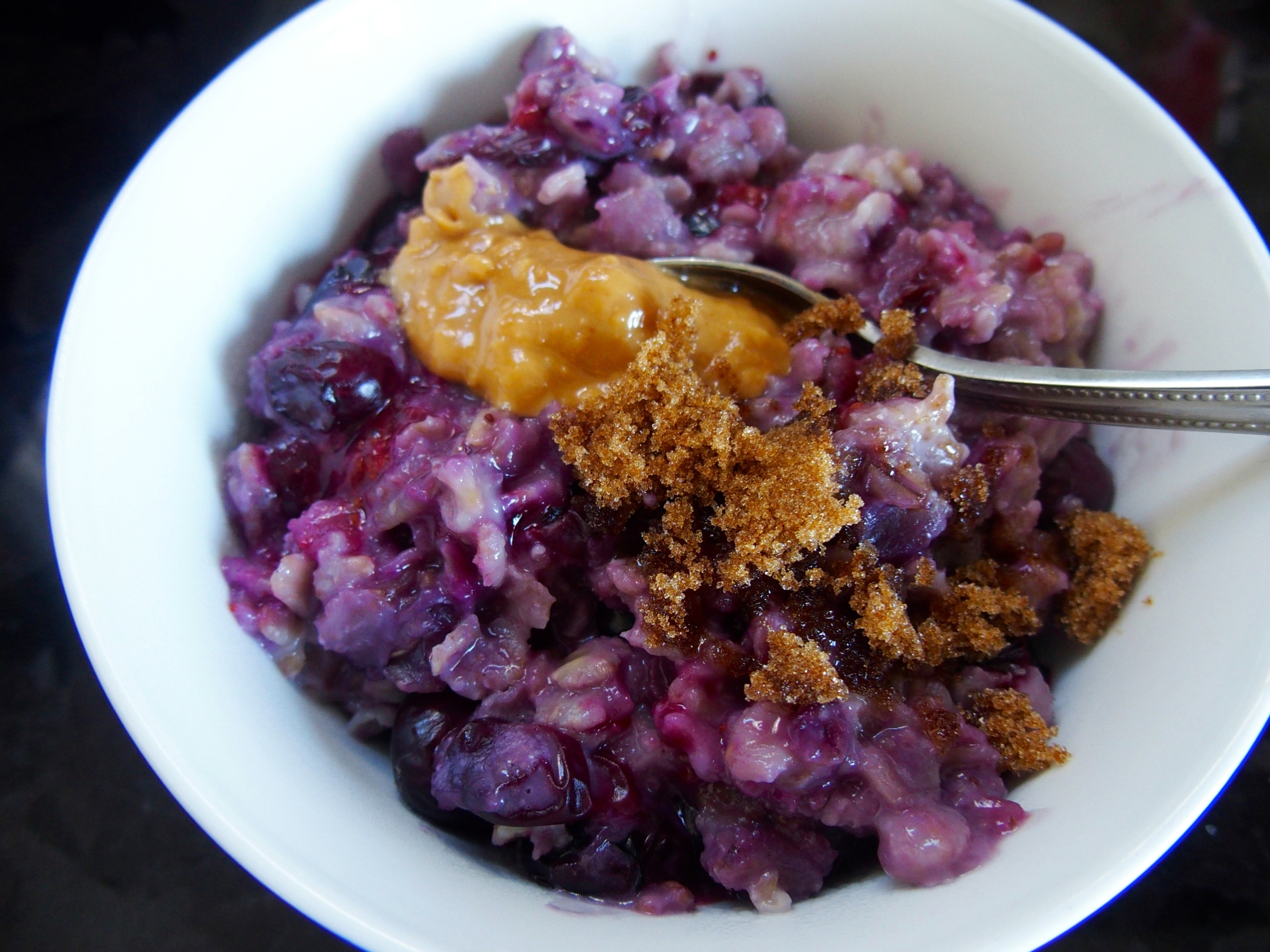 I know there have been a lot of blueberries on here lately – but they are going crazy and ripening super early and all at once in my backyard – so it’s been blueberries every day this week. As a result, my regular oatmeal has gotten a lot more colourful as I’ve been adding a 1/2 cup of blueberries to the oats/milk/water, … then finishing it with some peanut butter and a teaspoon of brown sugar. It’s perfect breakfast!

Also, I know that my first knitting project on here didn’t look uber-promising (but hey – it was my first) – but here is my second (after a bunch of practicing) and it is looking a wee bit better. Not without some tension issues, but it is definitely getting better as I go  (it’s going to be a multicoloured scarf with fringe on the bottom when I’m done).

I’m feeling pretty pleased with my newfound ability to knit and purl – and am also pretty happy with the choice of needles I made. Rather than continuing on with the cheap pair that I bought years ago to learn to knit – I mail-ordered a set of Hiya-hiya interchangeables (small, 5-inch, sharp) which had good reviews and seemed like the needles I would most want to use. I hate the feeling of yarn on wood, and metal crochet hooks have always done it for me – so i figured these would do the job. And better to just buy a good set of needles outright rather than starting with a cheaper set and then fretting about whether to upgrade a year down the road, right?

The difference was noticeable as soon as I started with these over the long needles I had been practicing with – they just don’t feel as awkward, and they fold up and fit into my work purse for morning bus-knitting. Plus they are *so* light in the hands. This far in, I have definitely got the hang of the basic stitches – and I’m hoping that by the end of this scarf I’ve refined my tension a little further, not to mention – neatened up the edges.

I gotta say – this is pretty exciting to me! I realized last night that for a couple of years now I’ve told people “I’ll learn how to knit when I finish my degree”…. and without really thinking about it, I picked up the knitting a month after my last class was finished. The goal must have been lodged in my subconscious, because I feel as though a little more brainspace has opened up and it’s allowing me to learn with relative ease (which has not been true in the past). I’m pretty convinced that this is something I can get good at – as long as I just keep practicing and learn how to fix my mistakes.

The only thing that worries me is – with so many more awesome patterns available to make, how will I ever choose? With crochet, there’s a limit to the possibilities (especially when it comes to garments like sweaters) – not so true in the world of knitting which is much more popular these days. Too many choices! But at least I won’t feel limited by textile type any longer. (Weaving comes next).

2 Comments on “Post #2016: My new favourite breakfast and more knitting”

Working from home during a power outage. Yeti battery backup to keep everything charged up, cel phone hot spot (we have weak signal, but some), battery operated lantern. Wood stove for heat in the background. Today’s outage was planned for repair work, so I was organized for it - but every time we lose power I refine my set-up just a little bit more.
Some incredibly pleasing after work weaving; shots taken with a proper camera to get the colour and detail.
Hard to capture the beauty of this forest green bamboo, but I do love a good hemstitch at the start of a project. #weaversofinstagram #weavingloom #weaverfever #handweaving
More finished items that I am just getting around to posting now. These plaited twill tea towels are the last of a batch that I put on the loom late last spring. I finally wove them off at the start of November (in time for some housewarming presents).
Finished these during the power outage this week. I suspect that another pair of socks is coming out of the ongoing communications line breakdown since I can't actually browse or surf my phone at the moment. Good luck, bad luck, who knows?
When the days get short, I forget about taking pictures of my work, so I have some to catch up on from the last week.
Went to Port Alberni today to meet up with some union folks and got a chance to look at fish and lots of fish eggs. This is a tray of one-day coho salmon.
I am going to be fifty in two and a half months.
I was supposed to be on a residential meditation retreat this past week but I was still too sick to go. Instead I made an at-home retreat with meditation practice in my tiny zendo, chanting service, soji (work practice), art practice, and lots of rest practice. I kept silence most of the time (I was here by myself) and stayed off social media. So grateful that my Zen community offered online participation so I could feel that I was sitting with others.
Preparing a warp: winding on 238 threads, tying the cross, a tied warp on the board and the finished warp chain. This is a small warp at 238 threads and 6.5 yards. From start to finish it takes me about 2 hours to complete this stage of the weaving process.
All this colour in the weaving stash (and this is just some of the cottons) and yet I'm winding an all-white warp today. At least these pretties are here to brighten up these grey mornings. #weaversofinstagram #weaverfever #handweaving #textilestudio
My small #glimakrajulia loom is empty for the first time in six months as I've used some of my sick time this week to slowly weave the tea towel warp off. Once I recover some energy I will start warping this loom again and then turn to fixing the warp on my larger loom.
Join 381 other followers