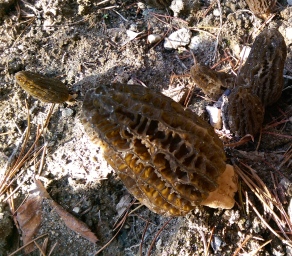 This is going to sound strange, but both times Brian and I have acquired a new house/piece of property together, we have been rewarded with a crop of morels soon afterward. The first time, was at the Urban Crow Bungalow where we discovered a meal’s worth of the mushrooms growing in the shade of our north facing garden in a patch of soil that had been dug up by the previous owners. That spot is now a shade garden that we planted, but at the time nothing was growing there except these mushrooms which popped up two months after we moved in. And now, just this past weekend, our co-owner Leung spotted a luscious patch of these growing at the corner edge of our newly built cabin – in disturbed ground that has seen both fire and  digging in the past year.

Sadly, I don’t expect to see them in either place again, for morels are not to be counted on to show up more than once in the same place – though their presence at our cabin indicates that they are in the area, and we might have some luck hunting them in wildfire and logging spots close by.

I’ll take them as a good omen, however, a welcome to our new home away from home (which is far from completion = but still getting towards plenty usable).

My favourite way to do morels is cooked with a light cream sauce over pasta – but since we had already brought a stew along to eat, we sauteed them in butter with some local late-asparagus (and a piece of bacon) for a super-fresh addition to our meal. It was a reminder that one of my big draws to the area (Keremeos in particular) is the plentiful fruit and veggies that come from the region – who knew that one of our first cabin dinners would involve tidbits grown right on our property.