Since I first discovered it two years ago, Rhubarb Ketchup has pretty much become a staple condiment in our house. It works as both a ketchup and a sauce for meats and involves two ingredients I always have lots of in the spring: rhubarb and canned tomatoes (from the previous year’s canning). So really, this combination is a bit of a no-brainer 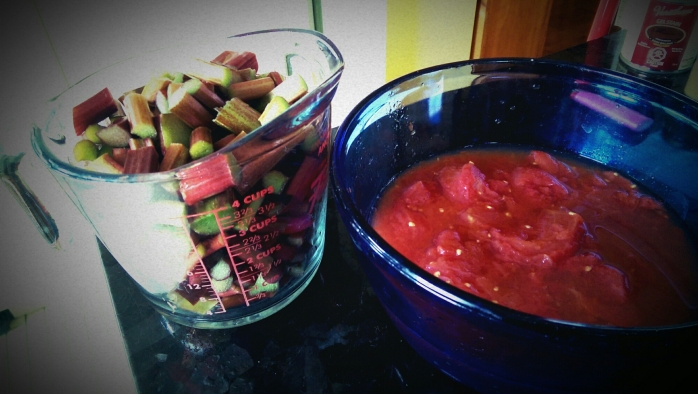 My alterations to the recipe that I originally poached off the Internet are typical ones for me – the addition of apple cider vinegar and a couple cloves of garlic – to punch up the taste a little bit:

Throw all that together in a pot and it will look like this: 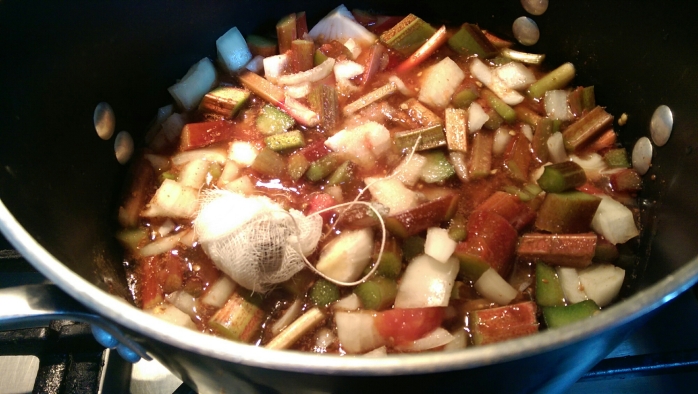 Bring the mixture to a boil and the put it on simmer for an hour to two hours (I like to cook it down a fair bit). Once the consistency is where you like it, remove the pickling spices and blend with an immersion blender. As you can see, this doesn’t have the colour of Heintz – no dyes or chemicals in this pot of awesome sauce: 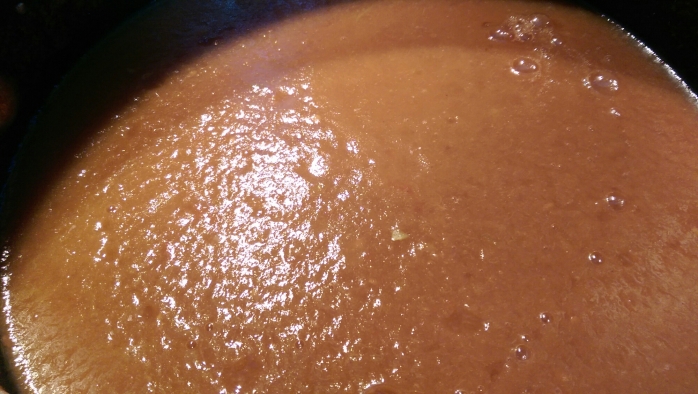 Process in a boiling water canner for 20 minutes and you’re done. Makes four pints and the recipe is easily (and safely) doubled.

← Another day, another brew.
Alchemy in jars →

It's party weekend @birdsonggabriola ! Showing off some recent dyes in party colours to celebrate: marigold, lac, brazilwood and cochineal. #summerofmaking2021 #hotgirlsummer #naturaldyeing #textilestudio
Introducing #studiotour Thursdays! Over the next few weeks I will show off the corners of my studio on #gabriolaisland as a way of sharing space with you virtually. I love to see where people live and work so let me know if you've posted a tour video of your space somewhere! #summerofmaking2021 #weaversofinstagram #makersgonnamake #handmadelife
Planning for #knitting some of my newly dyed yarn into a cowl. Basic design in greens, grey and purple. #summerofmaking2021
Design gamp on the loom! A gamp in weaving is a kind of sampler where we thread blocks with different colour or pattern threadings. This allows us to explire different colour and pattern variations in a single warp. In this case, the gamp is created through colour order, and woven entirely in plain weave. This is a @janestaffordtextiles weaving school project. #summerofmaking2021 #weavingsamples #weaversofinstagram #textilestudio
Got my warp all tuned up, my bobbins wound, and I'm ready to weave! #weaversofinstagram #weavingsamples #summerofmaking2021
A few more rows and this cowl will be finished #copenhagencallingcowl by @lilalu72. My 2nd time #knitting this pattern. #summerofmaking2021
No textile studio post today. Instead for my #summerofmaking2021 I'm showing you the show that we made at Birdsong tonight. We have been hosting a concert series this summer that will continue through until the end of August. Tonight we are graced by the presence of @tinajonesmusic - our neighbour and friend. So lucky to share my life with the creative people who surround us. 🙏 #gabriolaisland #houseconcert
The search for red continues.... so hard to tell what colours will look like when dry. I'm betting this madder is a bit orange but will try overdyeing with a small amount of cochineal later this weekend if that is so... #summerofmaking2021 #naturaldyeing #textilestudio
Brazilwood again with different water pH. I dyed this before I went on holiday. Still not getting the reds I want... pinks and oranges abound though. I've been meditating on what exactly I think about when I say red and trying to figure out how to get that colour I see in my mind .... I arrived home this evening so I'll be back in the studio with more dyeing and weaving in the next few days. #summerofmaking2021 #textilestudio #naturaldyeing
Simple vacation #knitting: one of my favorite kitchen items is hot pads knitted in wool (I double worsted weight for the right thickness). I use my sets daily, and they go in the housewarming packages I make for friends. Wool is antibacterial, antimicrobial, and it doesn't catch fire easily. Perfect for kitchen use! #handmadelife #textilestudio #summerofmaking2021
I brought a bunch of small balls of yarn along on my #cortesisland vacation so I could wind them for yarn dyeing. Here is the niddy-noddy with a skein, and the view from our suite. #summerofmaking2021 #textilestudio #naturaldyeing #makersgonnamake
Weaving terminology lesson for the non-weavers interested in the process! Before I left on holiday I threaded all the heddles on my loom and started to sley the reed. The first picture shows the heddles (first picture, white cord which has an eye in the middle) with cotton thread passed through. Each warp thread is passed through a heddle as part of what determines the fabric pattern. Each warp thread is also passed through a reed (second picture) sometimes more than one thread per dent (slot). The reed is one of the factors that sets the density of the fabric. Reeds come in different dents per inch, 10 dents per inch means there are 10 slots per inch. If I sett my fabric at 20, that means 2 threads per slot. My current project is 18 ends per inch, which I am sleying into a 12 dent reed. To get 18 epi I sley 2 threads in a dent and then 1 thread in the next dent. And repeat! #summerofmaking2021 #textilestudio #weaversofinstagram #weaverfever #handweaving