This here (above) is my most recent project on the loom. A wool-silk scarf with multiple twill patterns, threaded at 24 ends per inch. I did not choose the colours or the draft, it is entirely a project straight from a book (Next Steps in Weaving) because I’m still in beginner stage and I wanted to make something using suggested materials to get more of a feel for my loom and the weaving process. 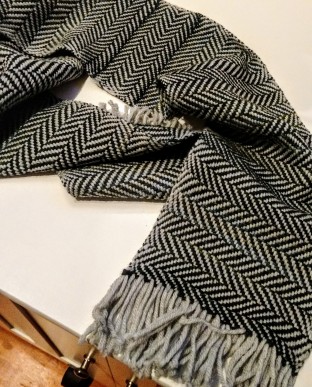 This scarf here (on the left) is my second scarf. It has very subtle shading in the weft that does not show up nearly as well as I had hoped. I gave this to my step-daughter for Christmas because what it lacks in colour-popping beauty, it makes up for in luxurious warmth and softness (sport-weight  merino). It’s got some quirks, but they aren’t noticeable when worn. One of the things I love about making things for M. is that she is always roundly appreciative and I’ve noticed over time that she uses them all (she is what knitters call knit-worthy).

Since I got my little loom up and running last month, I’ve been a bit obsessed with weaving – I don’t think the loom has been without a project on it for more than a day at a time, and each time I am mid-way through one project, I gather the materials for the next. This level of obsessiveness is pretty much a requirement when I learn anything – – I have to engage so thoroughly that nothing else interests me for a period of time.

One thing I’ve really started to understand about weaving is that colour works quite differently than it does in crochet or knitting or even sewing – because the colours don’t just lay beside each other, they work with and through each other. It’s a little like painting in that way – how things blend is more important than how they look side by side, and *value* becomes much more important because the contrast between warp and weft is so important to the overall effect.

Colour theory is something I was never exposed to in my younger life, because I took no visual arts in junior high or high school (it was impressed upon me that I did not have visual or manual dexterity and that I should leave visual art alone – I now realize that I suffered from a lack of patience and self-confidence mostly, and the same dexterity I use for playing the fiddle adapts well to pretty much everything else that requires fine muscle control in the digits).

When I choose fabrics or yarn for a project – it is entirely intuitive and with no actual knowledge about why I might pick one thing over another. This lack of understanding about colour has lead to some disappointing results in my sewing life. Such as this quilt:

Which turned out just fine, but was not the effect I was going for when I started it. Because I did not expect the colour to come together as it did – I ditched this quilt top for the better part of a decade before finally finishing it last summer. While all the shades “go together” what I hadn’t factored in was colour values. I had wanted the feature squares to be the dark green ones with the leaves, but because the batik four-patches were so much brighter, they dominated the quilt in a way I did not expect. On the other hand, my colour intuition is pretty good without any book-learning, so most of the things I make turn out alright.

I am now at a place where I would like to do more than alright, and approach colour theory in a more systematic way – though I do not have the time or means to drop out of everything and go to art school (and I missed the boat on Jane Stafford’s weaving workshops for this year). So I’m working with a few things I’ve picked up in the last couple of years to choose new palettes for weaving.

A couple of years ago I took a creative skills workshop where the instructor showed us how to make palettes using nature photographs – picking up the shade, tone, and colour elements by mixing watercolours which could then be applied to another project. I was fairly interested in this process, as I had never thought much about the colour symmetry in nature until doing a few of these exercises and creating a beautiful array of choices for applying any number of ways.

Thinking about that over the holidays, and inspired by some photographs from the Hubble space telescope – I decided to run a few of the more spectacular ones through Color Palette FX which allows you to plug any photograph in and then select five shades to create your palette. From there I grey-scaled them to help determine the value balance among my choices – because, as noted in my above quilt example – value is as important as hue when putting colours side by side!

As an example, this is the photo and palette I have decided to experiment with (with the greyscale for value analysis below): 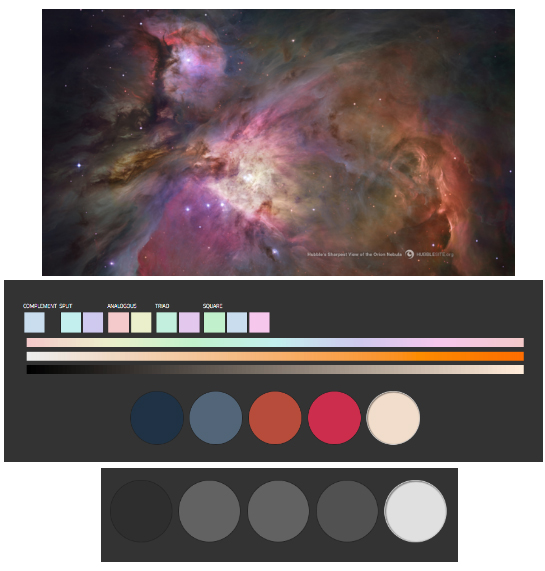 From this palette, I selected 5 shades of 8/2 cotton from which I plan to make plain weave towels – using the lightest value (ivory) as the background) with the darker values striped through the weft. We’ll see how it turns out – I was trying to get away from “typical” tea towel colours – though my finished product will be nowhere as spectacular as the hubble photo that inspired it!

As I have a weaving on the loom at the moment, I won’t be able to warp again for at least a few days (I’m hoping to weave the scarf off this weekend, and set up my dish towels after that) – so until I do, we won’t get to see how my colour play works out – but I promise to share here when I am warped, and again when I am finished. There is nothing I like more than a hand woven dish towel so even if it doesn’t turn out to be the perfect blend of value and hue, there will still be a usable item at the end.

Scones and blood orange marmalade with my sweetie on a cold spring afternoon. Scones by Brian, home #canning by me! #gabriolaisland
By the time this is finished, maybe we will be allowed.to have guests again!
Weekend #meditation retreat without leaving home. #equanimity practice with #mountainrainzen Sangha. So grateful for this opportunity to sit together during these times.! #zenbuddhism #meditationretreat
New sweater on the needles in springish colours. Fingering weight so it won't be quick to finish. Good thing I've got lots of quiet hours right now. #isabellkraemerdesign #chaunceysweater #stayhomeandknit #knittersofinstagram #gabriolaislandmaker #gabriolaisland
#currentlyreading #zenpoetry #haiku
#springflowers #nofilter
%d bloggers like this: