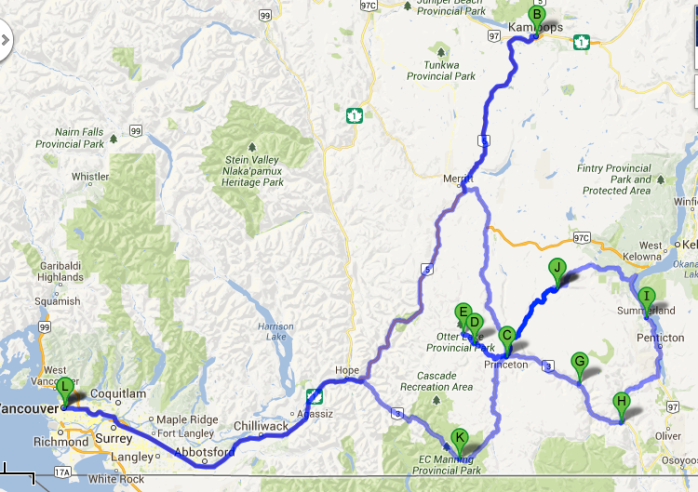 This map comprises 1250 kilometres of road trip that Brian and I took over three and a half days. We started with Kamloops only because I had a meeting there Thursday night, and after that we visited or drove through (in order):

Despite the fact that the driving was rough in some places (we explored a bunch of logging roads) I have to say that this was one of the most fun and relaxing trips we’ve taken in ages. We’ve discovered that the back of my car is long enough to sleep in with the seats folded down so no tent/worry about rain – and we headed out with little in the way of a set agenda after Kamloops which allowed us to decide what we were doing as we went.

This trip started out as a way to check out some potential placer mining claims that we thought might also be good hunting grounds, but as we discovered those claims were way too far out in the bush to consider, we found ourselves circling back around Princeton-Summerland Road to check out some real estate we’ve been vaguely interested in for awhile. The large piece composed of mostly wetland – which we really have wanted for months – is still up for sale and still too expensive. That didn’t stop us from checking it out again and walking the length of it. However, there are a couple other potentials up there at the moment – one which is a cheap lake-lot at Link Lake (not right on the lake, across the road from it), and one involving a share in a land co-op. As always when returning from these land-jaunts, B and I are now busy researching these possibilities with an eye to heading back up that way as time permits to give it a further look over.

We have been sometimes-looking for recreational property for the last couple of years. This has involved scoping realtor websites, driving to the occasional property, and checking out areas of the province we think might make good get-away zones for our activities. So far our list of wants includes a property that is roughly 4 hours from the city (not more than 5), close to or backing onto crown land, private (no subdivisions in the wilderness), and with good access to water for swimming in (creek/river or lake nearby). In short, we’re not particularly picky, but we have some parameters because we know how we would use such a place. Our biggest problem/parameter however, the one which is keeping us from owning anything at the moment, is cost. That is, BC real estate seems ridiculously valued, particularly land in the south-west quadrant of the province.

In the area we are currently looking, there are probably 100 properties for sale, plus a new development of 5-acre lots going in – and very few of them are on the market for less than $300,000. A lot that is priced lower usually has some major flaw (like the one we wanted to purchase – which is 34 acres, 90% of which is wetland or steep/unusable slope – selling for $170,000) or nothing more than bare, unserviced land exposed to the road. Even then, it isn’t possible to find anything for less than $150,000.

Which to a city-dweller in the most expensive real estate city doesn’t sound like much, except we are talking about areas where there are few to no jobs, no municipal services, and where the properties being sold are clearly for secondary use, not primary residences. Having looked now for a couple of years, I am pretty sure I’m not the only one feeling this way as many of the properties seem to sit year-after-year with nary a change in price (though real estate agents seem get get thrown over with fair frequency).

Now, I recognize that a recreational property is simply a nice thing to have and not a necessity – and I am not complaining about not being able to afford a luxury item. But the whole situation has gotten me curious – who is the market for the $350,00 recreational property? These aren’t exactly properties for the uber-rich after all, but at the same time very few Vancouverites can come up with that kind of money particularly given the very high cost of the city these days (not to mention the pricey nature of all the interior cities where actual work and decent wages exist). I know Bob Rennie and other urban developers have been peddling the myth that a whole new crop of retirees are just aching to downsize their homes, buy their kids condos and perhaps get themselves a vacation property – but the fact that many people are working longer than ever leads me to question whether or not the older retiree really is hankering to settle down in communities with limited medical services and long driving distances.

In any case, recreational real estate in BC seems to be in the same state as residential real estate in Vancouver – the prices are too high for what’s being offered, no one is particularly keen to pay those prices (or simply can’t pay them) but the sellers seem to think if they just hold on a bit longer they will get the price they want, and so – stalemate. I expect the whole thing isn’t going to hold for much longer in the city or the hinterlands because at some point people *need* to unload their real estate and start moving down the price ladder in an effort to do so.

All I know is that we have an amount we are willing to borrow for this endeavor and once a property drops into that range – we are interested. As I mentioned above there are two places which are possibilities at the moment and I am hopeful that by the end of the summer there will be a few more. Or that one of these ones (like the co-op) works out to be the right thing.

In the meantime, the road trips are fun and always interesting – more of those in the near future most definitely!

← In the Bookshed: Unlikely approaches
My summer of self-awareness →