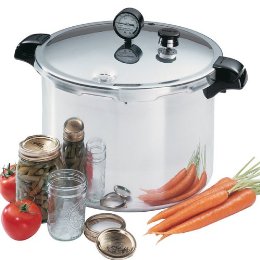 I am a little embarrased to admit that more than a year ago, my co-worker “leant” me a pressure cooker which has remained under my desk all this time – manual, weight, and all. Now, my co-worker has downsized and since she hasn’t asked for it back (it’s one of those loan until I need it kindof things), I think this summer it is time to bring that sucker home. Because this is going to be my year of pressure-canning! At least, I hope it is.

See, I’ve been canning for about fifteen years – not long after moving to Vancouver I decided to make jam for gifts even though I didn’t have a very large pot, or any canning implements. For a few summers, that’s basically what I did – a little jam, perhaps some Chinese plum sauce (we had a plum tree in my first Vancouver house), and that was all. But increasingly, the canning bug grew and since meeting Brian (an earnest partner in food storage it turns out) I (we) process up to 300 pounds of fruit and veggies in the summer. We do a little at a time throughout the season (I will be doing rhubarb next week most likely), but late in August we take a few days off work and we really go at it all day and all night until it’s done.

As much as I get cranky about it mid-process (by day three usually I am asking why? why? would I bother to do this much work when a supermarket with canned goods exists just down the way) – I am positively in love with the larder that is always offering up what I need during the fall, winter and spring. Pickled beets, salsas, pie filling, jam, chutneys, stewed tomatoes, tomato sauce – we use it all, and give lots away too (canned goods make a great hostess gift!). I could go on and on at how glad I am that this is a part of our practice.

But up until now, it’s been all boiling water canning – a method that requires no special gear, but also requires that everything be acidic in order to kill off any possibility of botulism. Fruit-bases are fine, but anything like vegetables, meats or legumes must be brined in order to be safe….. or…… Pressure canned!

I think this summer I am ready to go to the next level. Dried beans could be canned and ready for eating, fresh salmon can be chunked up and processed in its own oil, stews and soups can be cooked in the pressure-canner, ready to be heated and served. And what is the point exactly? Choosing one’s own ingredients, steering far clear of the food production industry, and keeping the chemical flavourings and colourings out of our food. Not to mention that it’s a lot cheaper than shelf-ready food – and it tastes more like you think it ought to.

So I’m on the lookout for anyone’s favourite pressure canning recipes – as I plan to make small batches of a number of things in hopes that I learn what I like and don’t like this year. I know from years of boiling water canning that sometimes you *do* throw out batches of things because they didn’t work, or for some other reason…. which I’m sure will be the case with learning to pressure can. So let me know if this is something you do and you have something to share!

Had so much fun mixing paints from natural dye materials and then painting and stenciling with them this last week. What I really couldn't believe was the difference in colour between the dried paints and when they were heat finished with steaming. They became much more vivid in that process. More on the agenda for this week including building a colour wheel from more colours!
I've been beating myself up about letting my powerlifting go over the last few months. Not completely of course, but I've been too intermittent and that reflects in my overall strength gains. Today I went to the gym after a wee break and decided to go as easy as I wanted to, as light and as slow. Focus on form; make sure I got in the one exercise that keeps the Mortons neuroma in my foot at bay. No surprise, it was the most enjoyable workout I've had in months!!! And then I washed off the sweat by swimming to the reef and back in this strange October weather. #fitatalmost50 #powerlifting #gabriolaisland #gabriolafitnesscentre
Stenciling and painting with natural dyes. Turns our I love the process of blending colours over a stencil. @maiwaschooloftextiles #maiwaworkshop #maiwaschooloftextiles #printandpaintwithnaturaldyes #surfacedesign #textilestudio
Studio time. Making marks with the paints I cooked up earlier this week.
This is the songwriting studio, Paradise, at our home on Gabriola Island. A friend of ours built this during the pandemic and it mostly gets used for extra sleeping space during parties. I just cleaned it after a summer of use for our next songwriter-in-residence @kimberley_macgregor this afternoon and now I'm hanging out remembering how lovely this space really is. Newly acquired artwork by @c.r._avery visible in the photo. We are blessed by the creative energies of others at Birdsong Gabriola. #songwriting #writing #birdsonggabriola #writingresidency #gabriolaisland
Making paint out of natural dyes and creating samples of my colour pallette tonight. I think I'm going to wait until I have more natural light to work with these!
I never swim this late in the season but I had some bad juju on me from the weekend that needed washing off. So clear, the water, so cool and still. I swam to the reef and back, disturbing the sea birds perching there. It was the only way. #writingtheendtimes #gabriolaisland
Finished Module 2 of the @maiwaschooloftextiles #printandpaintwithnaturaldyes course last night. ⁠
Excitement in the dye studio this morning when I lifted these test pieces out of their pots and discovered how well the dye adhered to the painted and stamped mordant on the cotton fabric! Dyed with buckthorn (yellow) and cutch (brown) - I'll be interested to see what these look like when dry. On Sunday I plan to dye the "finished" pieces from this @maiwaschooloftextiles #printandpaintwithnaturaldyes module, which have been painted and stamped with mordant already... and will share more process pictures when I'm done!
Some of my printing blocks for Module 2 of the @maiwaschooloftextiles class I am taking. I am excited to show results after I have finished this process later this week! #maiwasupply #maiwaworkshop #maiwaschooloftextiles #printandpaintwithnaturaldyes #textileprocess #textilestudio
The canning kitchen is getting another workout today. This outdoor set up really was a fantastic investment, especially loving it on the mild fall days. #canningseason #foodpreserving #Canning #pressurecanning #foodsecurity #fillingthepantry
For the first time in three years I stepped into the Wall Street Zendo this morning. I showed up in person to practice with my #zencommunity and deliver a talk on what brought me to Zen practice. It was a deeply moving morning of reflection and kinship for me, a reminder of how much we need each other on our path through this lifetime. #zenbuddhism #spirituallife
Join 379 other followers