When quitting is getting ahead. 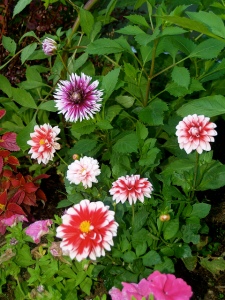 I had a total sewing fail this week – wonky dress pattern with at least one wrong-sized piece from the manufacturer – and a plaid I didn’t have enough of to match up properly so the dress bodice came out looking strange. I never bothered to get beyond the initial stages to find out if it was going to come together in the end because after trying on the bodice I decided I didn’t like the plaid well enough to wear it anyway.

I was proud of myself though because rather than sweating over it, cursing myself and my lack of knowledge, or stressing out about the wasted fabric (which was a cheap piece from Value Village) – I just let it go as soon as I decided it wasn’t working. Which is something I am only now learning to do.

Sadly, I’ve never been particularly good at letting things go and moving on. Not that I am a holder of grudges, but I will stay in things until the bitter end even if that thing is causing me all sorts of misery. I was raised to believe that it’s dedication to practice that makes us worthy and competent – competence being the highest-valued attribute in my family – and thus find myself often stuck between wanting to abandon things and feeling obligated to keep on. While this makes sense in some spheres, there is absolutely no logic in it when the sphere is supposed to be fun – like a sewing hobby. And I’ve realized recently – on this steep learning curve of sewing and crochet – that if I bully myself into finishing unfulfilling work too often I will destroy any desire for it. Which becomes one more thing that I’m not good at, which becomes the reason I am “no good at anything.” And on. And on.

So I’m learning to let go of projects that are not working which allows me to focus on projects that could potentially work, and clears the deck of a lot of misery. This weekend, I additionally threw out three or four crochet projects abandoned over the summer that are never going to get fixed or finished – and I am feeling a lot better about the one I am currently working on as a result. Funny how that works.

The fabric from today’s failed dress is now in my scrap bin waiting to be turned into scarves and other scrappy projects – and I’ve started a green wool jacket for fall which is already coming together nicely.

This insight quite obviously works in other areas of my life at the moment – most notably my shift away from my union leadership path to becoming a grad student. As miserable as the one road was making me, I am still trying to reconcile dropping my plans and moving onto another thing entirely. I’m hoping that grad school will be the green wool jacket and that once I am immersed my doubts about leaving the other will subside. We really can only move forward when we cast some things behind us, but in between is the decision about which is worth pursing.

Airplane knitting. Turns out the shawl pattern I picked to start on this trip needs hella focus which was a perfect way to distract myself from a 5 hour flight from Vancouver to New York. #knittersofinstagram #kniteverywhere
Looking forward to starting this knit during my upcoming vacation. I love all patterns by @lilalu72 (Isabell Kraemer) and this merino/silk yarn from @smallbirdworkshop is spectacular. Perhaps I don't *NEED* another shawl but I don't have any accessories in this colour and it's about time! #knittersofinstagram #knitallthethings #textilestudio #knitting
The colour pallette of these chairs at the airport caught my eye today. Filing for future weaving or other textile combos. #colorwheel #comfortablechair #colorcombination #textilestudio
Handspun merino wool dyed with lupine three ways: bottom is a regular dye bath, left/center is shifted with vinegar post-dye, and top is shifted with iron post-dye. The cotton DMC floss I put in the bath took up almost no dye at all. Not the most satisfying but now I know! #naturaldyeing #textilestudio
A couple of lupine stalks broke off so I set up the summer dye kitchen last night to see what colour they might give me. I was hoping for a green but it looks like yellow (once the samples have dried I will share). Nice to get some plants cooking in the #dyepot in any case! #textilestudio #naturaldyeing
Cloth. #plaitedtwill #weaving #weaversofinstagram #textilestudio
The symmetry of unfinished bobbins... I'm going to have to put a plain warp on one of these days and weave all these off in some random way.... #textilestudio #weavingsamples #weaversofinstagram
A couple of small #mixedmedia studies I just glued into my #sketchbook. #textilestudio #textilearts #smallthings #sketchbookpage
This photo does not do justice to the colours of these yarns dyed by @smallbirdworkshop out of Nanaimo. A mix of wool and hemp, I'm looking forward to knitting this into socks and hoping that the hemp provides the sturdiness we normally find in nylon. I'm working on getting plastic out of my textile making bit by bit. #knittersofinstagram #noplastic #knitting #dyeing
I started this warp in March but covid and work stress got in the way. I am finally feeling a return to energy and back on the loom this week. I have 4 more towels to weave off after this one! #weaversofinstagram #weavingloom #weavingdesign #weaverfever #textilestudio
Bought a vintage knitting machine today for $100 (a Brother 840). As far as I can tell, it hasn't been used even once. Besides some discoloration on the plastic, it's in pristine condition with all parts still in their factory spots. I plan to use this for knitting blanks to dye for self-striping sock and shawl yarns, but first I've got to learn how to use this thing! #machineknitting #machineknittersofinstagram #idontneedanotherhobby #knitting #textilestudio #learningcurve
Secrets of the Stolen Kimono #1 and #2. Finally finished and framed!