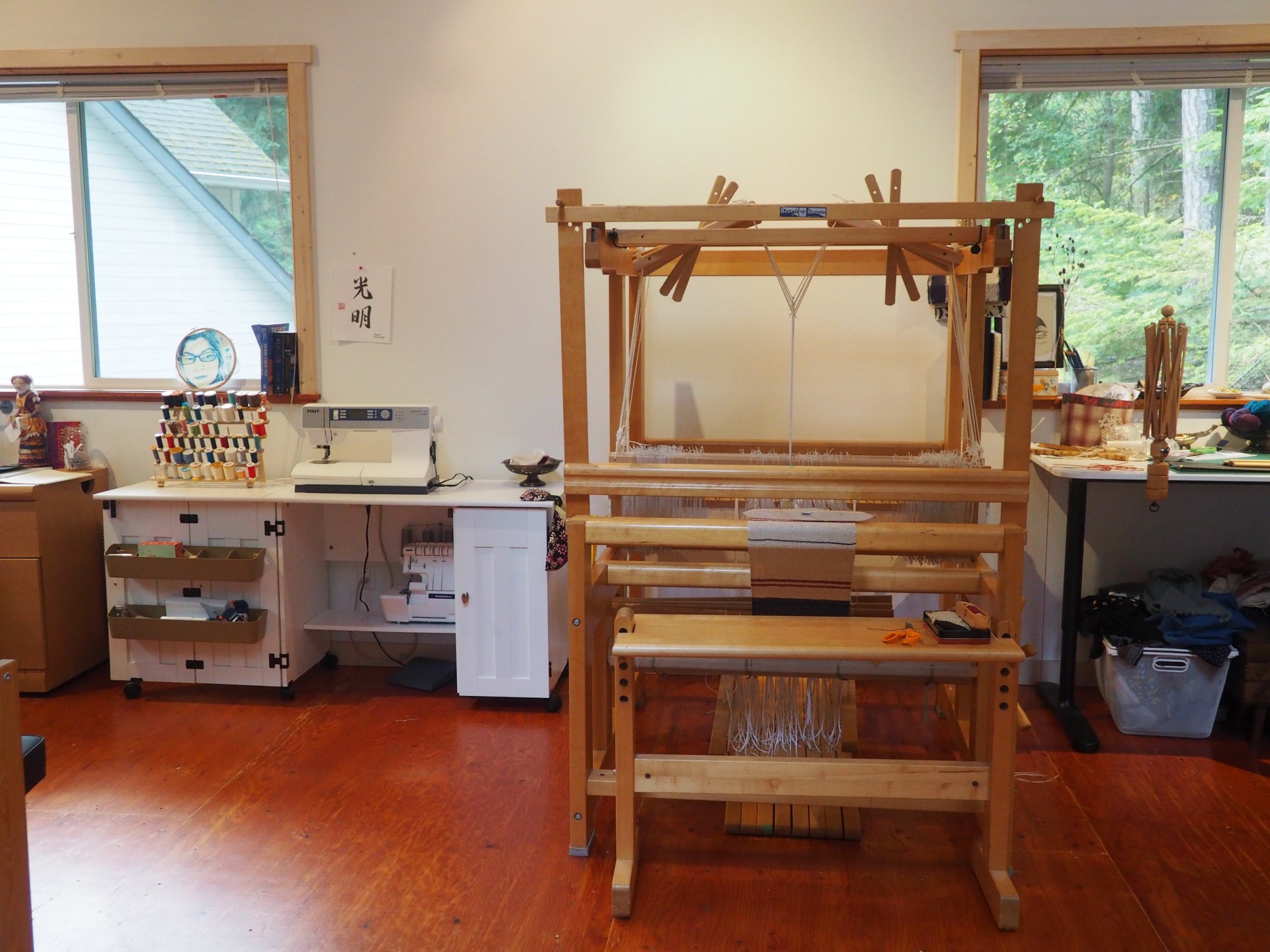 I bought a new loom this month. You can see her above – she’s a Berga Savonia countermarch, made by a Finnish company called Varpapuu. From what I can tell, the company went out of business long before the Internet existed (instructions kicking around are hand-drawn and typewritten), but this loom hasn’t lost anything to age and the finish remains as new. She is 39 inches of weaving width, set up as an 8-shaft/10-treadle with the capacity to expand to 10 shafts (the jacks are there, I would just need to purchase shaft bars and lamms) – and a sectional beam which is a new feature for me.

This loom came to me through a weaver who lives up the road from me on Gabriola Island. We have been talking about it for over a year. At first I thought I wasn’t interested because for awhile I imagined I wanted a loom with much wider weaving width. While that was going on, I was moving towards getting rid of the first loom I ever acquired (the 45 inch hand-built countermarch I had restored every inch of) and that I did not love weaving with. This was difficult not only because of the amount of time I had invested over several years, but also because big old looms with shaky provenance are difficult to sell. In the end I near-gave it away to a young art student stuck at her parent’s place on-island at the start of the pandemic.

So by April, my loom-space was free and I was ready for whatever loom came next. The weaver up the road with the Berga was not interested in selling then because she wanted to sell the other loom in her space first, so I let it go and thought about maybe trying to save up for a Louet Spring (beautiful looms but outrageously out of my price range). Through the spring and summer, I barely wove at all anyway – I had one project on the Julia for all that time (a sauna towel for my husband that I just finished last week).

But at the start of this month, I got a message asking if I was interested in coming to take a look at the Berga. Before I even got there, I knew it would be the right thing, right now. As much as I have dreamed about wider projects or more complicated weaves, I only have so much time for weaving, and only so much space in my studio I am ready to give to it. The Berga not only is near-identical to my 26-inch Glimakra Julia, seriously reducing the learning curve, but fits perfectly into my studio without reducing the sewing space I need for garment-making and my home office.

Although I don’t have the equipment that makes warping a sectional beam easier, I did get a 3.5 yard warp on last week by winding and chaining two-inch-wide sections and then beaming them individually (crank and yank method). To start out I decided on a plain weave project threaded on all eight shafts – face cloths using a boucle weft – simple to weave, giving me a chance to just feel out the loom.

So far, so good – she weaves beautifully and set up was no worse or more complicated than the Julia. I do want to change the treadle tie up style, and have ordered black and white pony beads to better indicate upper/lower lamms to do that.

I have ordered an AVL warping wheel which will get delivered sometime in October. This will facilitate direct-warping onto the sectional beam and reduce some of the warping time and stress. But before then I plan to weave off these cloths and start a bathmat – another short-warp that I believe I can manage through the more labour intensive process I’ve devised for now.

I’m really happy I allowed myself to get rid of the loom that was no longer serving me to make room for this one. That first loom was a big teacher for me – having to take apart and put back together a countermarch loom taught me a lot about the equipment I would have never learned another way. It wasn’t wasted effort, and recognizing that it wasn’t a loom I wanted to weave on very much helped me appreciate what features I did want in a loom. The Berga, has all of those features – easily removable beams, ratchet and pawl brakes, lamms on two different levels, and “doorways” in the back that make it easy to access the insides (and wind on the sectional alone). I am really in love with this loom, and can’t wait to experiment with its full range of possibility.