Yesterday was a blustery, cold day here on the island – but that didn’t stop me from going into Nanaimo to protest the Phoenix pay system, blight to the federal workforce!

While I was there, I also stopped by my old office to pick up my things as I was kicked out of it a couple months ago for someone who doesn’t have the option to work from home. Since changing my reporting relationships a couple of years ago, I haven’t really had a work “home” in BC – and as a result have become entirely telework based over the past six months. I turned my pass key in yesterday and that was it, I’m officially an itinerant worker.

Now I have a bunch of boxes in my car that I am determined to ruthlessly sort through because I am 100% sure that most of that stuff is not at all necessary and can go to thrift or garbage.

When I got home from my travels I spent a bit of time in my studio – and decided to get the five fat quarters that came with the Sew Haley Jane mailing out of the way. I’d been looking at quilt patterns to use them in – but honestly, as much as I love the colours, I couldn’t see them in my home. So instead, I cut them, finished the edges and added some ribbon – and voila! Wrapping cloths: 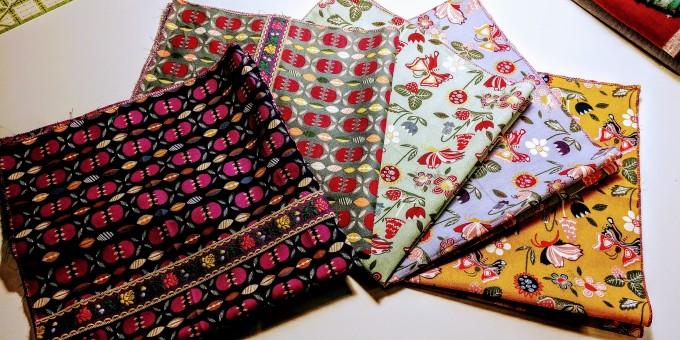 For a number of years now I have used cloth scraps and remnants instead of wrapping paper for gifts – much less wasteful and the fabric is easily reusable. Also, a nicely finished cloth wrapper becomes part of the gift!

These ones are 18 x 18, finished with a tight zig-zag stitch along the edges. A small but satisfying project that can wrap an average sized book, an 8 x 8 box, or a grapefruit sized round object.

I’m glad I went in the studio in the afternoon instead of waiting until after dinner because not long after I got these done, the power went out!

We’re still out as I write this – so whatever happened was no small event (I understand that some kind of surge blew two transformers) – and my battery powered devices are dwindling. Fingers crossed we get it back before noon!