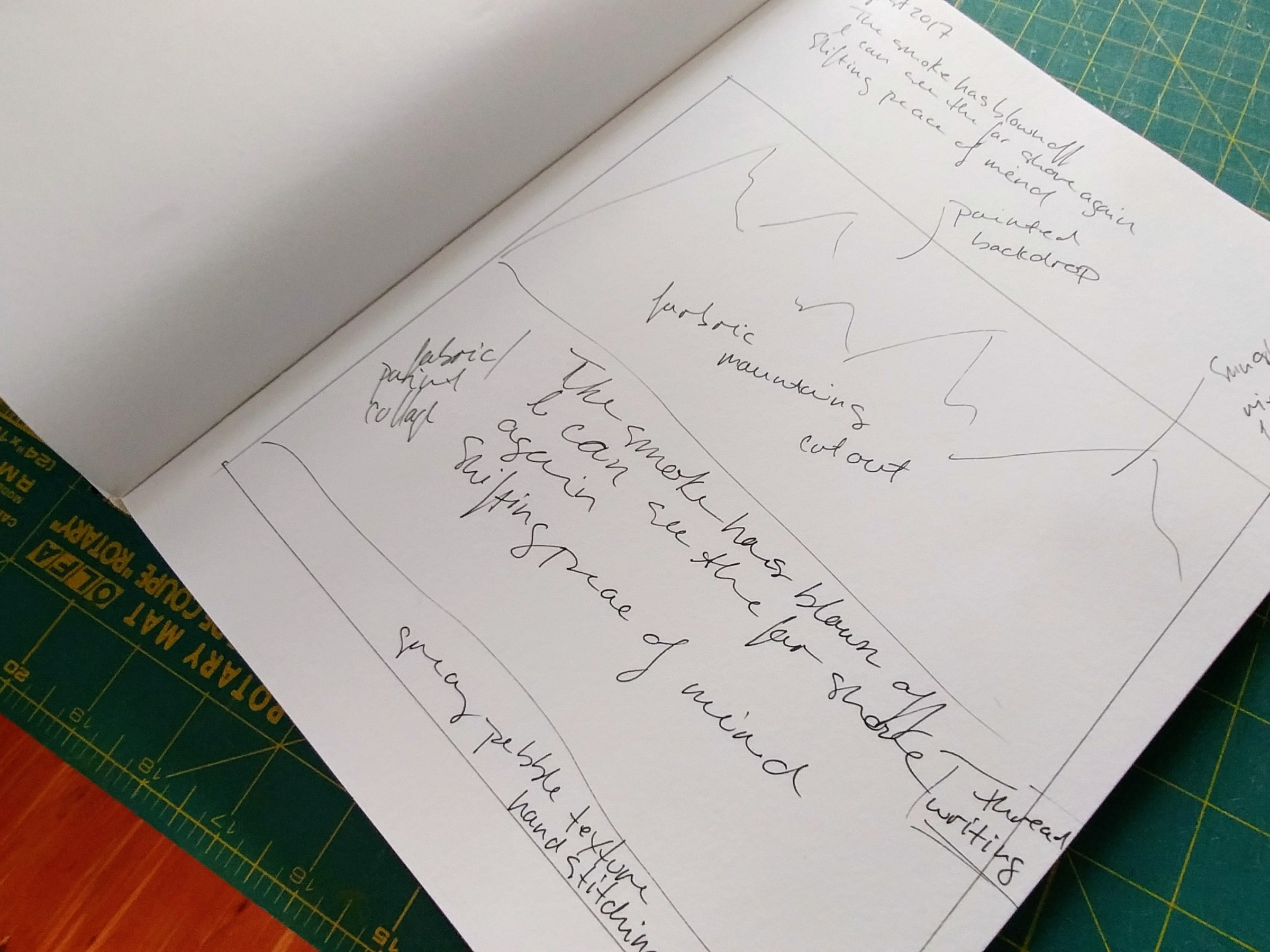 The smoke on the BC coast cleared this weekend. After two weeks of nicotine-coloured light and a smoke ceiling emanating from the interior fires – we can see blue sky with normal clouds passing over again, and we even had a bit of rain on the weekend which brought some cooler temperatures with it.

And that was all it took for the lethargy I’ve been feeling in this latter half of summer to shrug right off. I’ve heard that the smoke has put everyone into a state of low-level carbon monoxide poisoning – much worse if you are in the interior, but not good wherever the smoke has lingered – and I’m pretty sure that Brian and I have both been feeling that effect. Tired, sore throats, burning eyes, lots of napping – low interest in things.

But as of Friday, both of us were back in our studios working on our projects – he’s just getting ready to go into final mixing on his first solo album – and I divided my time between weaving, sewing, and sketching some new ideas into the textile notebook.

As a teenager hanging out with visually-artistic friends, I was always jealous of the sketchbooks filled with colourful images and  bits and texture and paint. My notebooks were of the word-filled type, with the occasional doodle that I quickly inked over because they weren’t any good –  those being the days of adolescence when I believed that everyone was paying attention to what I did or didn’t do well (oh! the freedom of realizing that almost no one cares about what I do at all).

Though I have filled many notebooks with writing, I have never been the type of person to create a scrapbook or even collect much in the way of ephemera to put in such a thing – though a couple of years ago I started gluing fabric practices into a large bound book I had bought for the purpose. Since 2015, many of my experiments – stitching, painting fabric, weaving – have made their way into this book. Mostly it serves the purpose of a visual reference for things I might like to return to or incorporate into later work – but more recently I find myself putting full-on sketches – in ink and fabric down on these pages.

Besides the fact I’ve had a bit of time and space this week, I think what has been making this type of “idea work” possible for me is that I have just stopped caring about how sketchy the sketches are. As you can see from the photo above, my sketch from this morning is more like scribbles than anything. It’s the idea I had while driving back from dropping Brian at the ferry – and I wanted to make sure I got it down quickly so that I didn’t lose it for later. Besides drafting this out in five minutes, I took another ten to generate two fabric swatches treated with watercolor paint which will get attached to the page when they are dry. From there, I will blow up a photo and create a sketch of the mountain range across from me, I will practice some thread writing, and then I might create a whole textile “sketch” as well. From that textile sketch, I might create a more finished work, or maybe not. One of the sketches I completed a few months ago is now hanging in my house and is commented on by visitors pretty often: 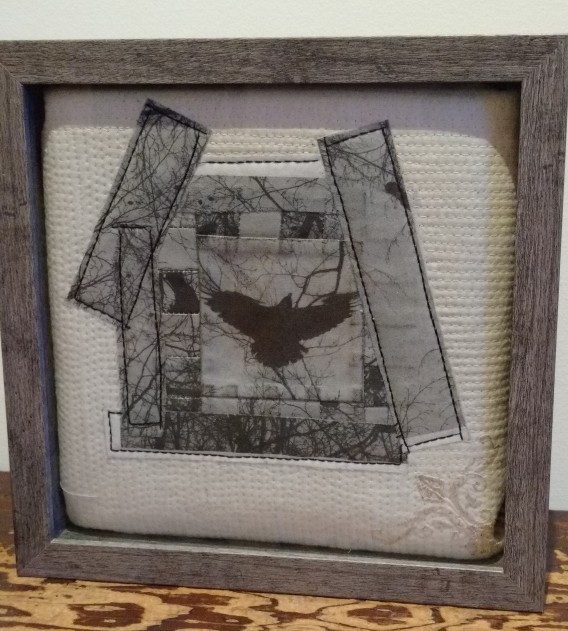 While there is plenty about this piece that I would change, working a sketch through to “finished” taught me a lot about the processes I was using and would like to use in the future.

It seems to me that the sketchier my initial sketches are – the easier it is to get the ideas out somewhere that I can reference them later. Otherwise, I just plain forget, which seems a shame when I don’t have that many good ideas to begin with.

I am hopeful that this recent  increase in putting ideas to paper will result in more original work as life space permits. While I have long realized that I need more chances to get into the studio fresh in the morning for original work – I recently came to the understanding that all the work I do in the evenings – the sewing and weaving and pattern following  – is practice for the times that I am inspired. That time of “rote” making is all skills-development so when I am struck by some new expression, I don’t have to learn all the practical elements to bring it together. I see that now, as more of my ideas are easily transmitted to textile – in the past I had no idea how to make my thoughts tangible even thought I had lots of good ones (which went unsketched!)

A few years ago I came across this passage by Ira Glass which has continually resonated with me. It’s all practice! Really. It’s all getting the ideas out until we find the thing that makes the special thing happen. I’m still finding the special thing – but I know I am much closer now than I was ten years ago:

“Nobody tells this to people who are beginners, I wish someone told me. All of us who do creative work, we get into it because we have good taste. But there is this gap. For the first couple years you make stuff, it’s just not that good. It’s trying to be good, it has potential, but it’s not. But your taste, the thing that got you into the game, is still killer. And your taste is why your work disappoints you. A lot of people never get past this phase, they quit. Most people I know who do interesting, creative work went through years of this. We know our work doesn’t have this special thing that we want it to have. We all go through this. And if you are just starting out or you are still in this phase, you gotta know its normal and the most important thing you can do is do a lot of work. Put yourself on a deadline so that every week you will finish one story. It is only by going through a volume of work that you will close that gap, and your work will be as good as your ambitions. And I took longer to figure out how to do this than anyone I’ve ever met. It’s gonna take awhile. It’s normal to take awhile. You’ve just gotta fight your way through.” ~Ira Glass