I had a bit of a weaving breakthrough this weekend.

It turns out that some shuttles (the thing with the weft thread in it) are more easily thrown than others. Also, it turns out that sometimes standing is better than sitting. On my 4-shaft J-made loom, these details made all the difference and I’ve completed two different fabrics in the last two days.
But let me back up a bit here. The photo up top – that’s fabric being made on my Ashford Knitter’s Loom. I got that loom for my birthday – it is 20 inches wide and capable of making cloth just shy of that width in plain weave (that is, the equivalent of a 2-shaft loom) The very first thing I made on it was some rather grumpy (to me) fabric out of some yarn that I didn’t feel like using for anything else. Because the yarns were so unbalanced (that is, totally different fibres and weights), the weave was uneven. Initially I was really unhappy about this — so unhappy that I didn’t take pictures of it or anything and I wadded it up in the bottom of my loom bag. Then last weekend I had a need for a small mat for the zendo and I remembered the rough fabric that I had thrown away from me on completing.

Turns out, the rough weave was less upsetting to me five weeks after the fact, and after cutting, seaming and finishing I had this:

As in, a totally usable piece of fabric that works as a rough weave and for its intended purpose.

After making the first rough fabric, I had started warping some tea towel fabric in orange and natural cotton and then abandoned it in the dining room partway done. It sat there for about six weeks until last weekend, while getting ready for easter festivities, I decided to finish threading and tying it up so I could move the loom out of the way and set my table. After my guests departed on Monday I was left with a fully warped loom, and so I wound some bobbins up for one of my boat shuttles.

I had not been successful up until this point at learning to “throw” the shuttle on my J-Made 4-shaft loom, and so I was surprised when a little way into weaving on the rigid heddle I was throwing pretty easily – after only a few hours of practice it was relatively smooth (and would have been smoother if my warp was a bit more uniform). This weaving thing suddenly seemed possible.

So I pondered if my throwing problem on the J-made was the shuttle and went up to the studio to take a look. I first tried with my newfound throwing skills using the small open bottomed shuttle that I had on the loom…. but no dice. Even with my improved technique I could not get the shuttle to fly. So I switched off to a close bottomed shuttle and lo! Things became much easier.

And so I spent the last few days weaving off two warps on two different looms. Yesterday morning I finished my first set of tea towels: 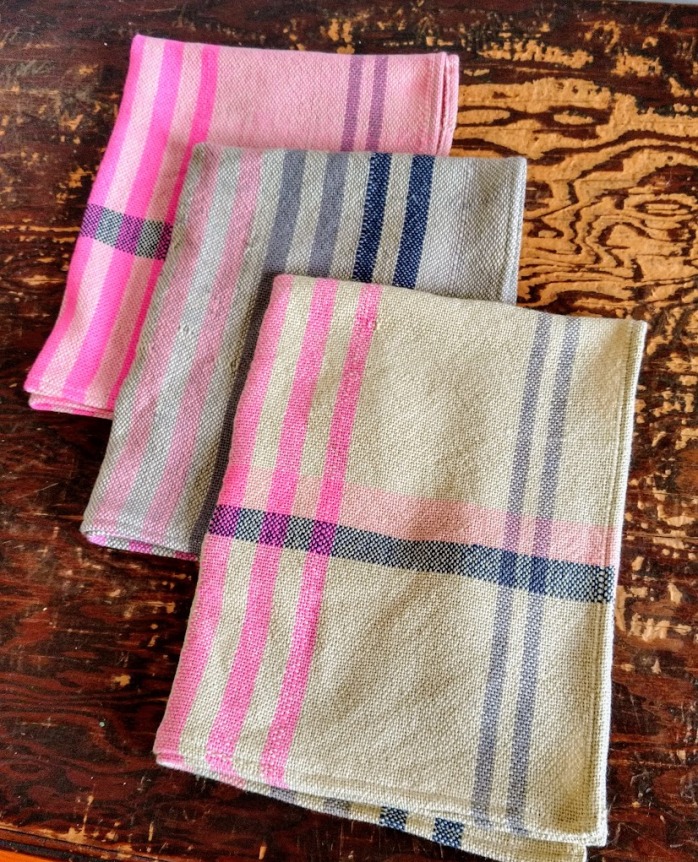 Tonight I will finish the orange tea towels. And then I will start the process all over.

What I am really trying to write about here is how we learn things, how the lessons come from picking things up, putting them down, and picking them up again. There was a time in my life when I refused to try things I didn’t already know how to do because I was afraid of looking stupid. That changed when I was a little past thirty and I decided to learn about sewing. There are things that I made in that learning time that I still use today and I expect that will be true about these early weaving attempts as well.

I am thankful that I got over that insecurity that stopped me so many times when I was younger, but even now I feel it when I struggle with mastering new skills. I do walk away sometimes, or I pick up different tools for awhile and play with those instead. What this last week has reminded me is that 1) even ugly things are useful and often beautiful, 2) learning time is allowed, and 3) coming from a different angle often helps break down the lessons.

So I have two sets of tea towels. Tea towels with issues, no doubt, but usable objects in their own right. I look forward to two more projects going onto the looms: a nine yard warp for many more tea towels on the J-made and a small floor mat made with “found” yarn on the knitters loom. More lessons ahead!

The search for red continues.... so hard to tell what colours will look like when dry. I'm betting this madder is a bit orange but will try overdyeing with a small amount of cochineal later this weekend if that is so... #summerofmaking2021 #naturaldyeing #textilestudio
Brazilwood again with different water pH. I dyed this before I went on holiday. Still not getting the reds I want... pinks and oranges abound though. I've been meditating on what exactly I think about when I say red and trying to figure out how to get that colour I see in my mind .... I arrived home this evening so I'll be back in the studio with more dyeing and weaving in the next few days. #summerofmaking2021 #textilestudio #naturaldyeing
Simple vacation #knitting: one of my favorite kitchen items is hot pads knitted in wool (I double worsted weight for the right thickness). I use my sets daily, and they go in the housewarming packages I make for friends. Wool is antibacterial, antimicrobial, and it doesn't catch fire easily. Perfect for kitchen use! #handmadelife #textilestudio #summerofmaking2021
I brought a bunch of small balls of yarn along on my #cortesisland vacation so I could wind them for yarn dyeing. Here is the niddy-noddy with a skein, and the view from our suite. #summerofmaking2021 #textilestudio #naturaldyeing #makersgonnamake
Weaving terminology lesson for the non-weavers interested in the process! Before I left on holiday I threaded all the heddles on my loom and started to sley the reed. The first picture shows the heddles (first picture, white cord which has an eye in the middle) with cotton thread passed through. Each warp thread is passed through a heddle as part of what determines the fabric pattern. Each warp thread is also passed through a reed (second picture) sometimes more than one thread per dent (slot). The reed is one of the factors that sets the density of the fabric. Reeds come in different dents per inch, 10 dents per inch means there are 10 slots per inch. If I sett my fabric at 20, that means 2 threads per slot. My current project is 18 ends per inch, which I am sleying into a 12 dent reed. To get 18 epi I sley 2 threads in a dent and then 1 thread in the next dent. And repeat! #summerofmaking2021 #textilestudio #weaversofinstagram #weaverfever #handweaving
Visiting #cortesisland this week. The gardens @hollyhocklife are incredible right now and I'm already designing a weaving inspired by these colours! #summerofmaking2021 #textilestudio #naturaldyeing
#janestaffordonlineguild Season 2, Project 1. With a single warp there are many options. The first piece is for my sample book, the rest are towels for use in the house. All plainweave. Not perfect weaving by any stretch, but learned a lot going through Jane's steps. My favourite is the one on the end which was re-sett at 12 ends per inch and woven with boucle I had leftover from something else. That towel is now in our upstairs bathroom.
I'm dyeing 100-yard skeins this summer in order to test the greatest range of colours, overdyes, and mordants without making too much of any one colour. In order to do that, I scour and then mordant a large skein, dry it, and then wind it off the yarn swift and through a yardage counter. After that, I re-skein it on a small niddy-noddy and tie it with dyer's knots. It's quite a bit of work before anything hits the dye pot! #summerofmaking2021 #textilestudio #naturaldyeing #makersgonnamake
Today's #summerofmaking2021 post is entirely unrelated to textile arts. Behold instead the refrigerator pickles made with the cucumbers I got from @watercliffpermaculturefarm on Tuesday! I've never done fridge pickles like this before but wow, did these ever turn out nicely. We polished off nearly a quart of them last night at dinner! #pickling #makersgonnamake #handmadelife
Logwood produces violets, greys and blacks. Also know as Campeche wood, it originates in Central America. The first photo shows logwood dye on yarn mordanted with alum (top) and oxalic acid (bottom) in a first dye flush from the logwood chips. The subsequent photos are dyed from a second flush. I note that the colilour on the fabric is somewhat patchy, especially with the second flush (though I love how the vintage napkin turned out). I will do some overdyeing with indigo later this summer. #summerofmaking2021 #textilestudio #naturaldyeing #makersgonnamake #schoolofsweetgeorgia
One of the more challenging warps I've put on in my #weavinglife - so much so that I switched warping strategies halfway through (hence the painter's tape). @janestaffordtextiles #learningisfun #weaversofinstagram #weaverfever #summerofmaking2021
Cochineal is an insect which has been used to produce pink and red dyes for centuries. To make the dyestuff, we grind the dried insect down, and then extract the dye from the powder by heating baths of water and dyestuff on the stove, straining off the concentrate and refilling the water repeatedly. You can see here the result of cochineal applied at 8% weight of fibre. While it's a striking colour it's a bit too pink for my reds weaving project so I am overdyeing it with fustic today to see if I can push it to more of a red. #cochineal #naturaldyeing #textilestudio #makersgonnamake #summerofmaking2021