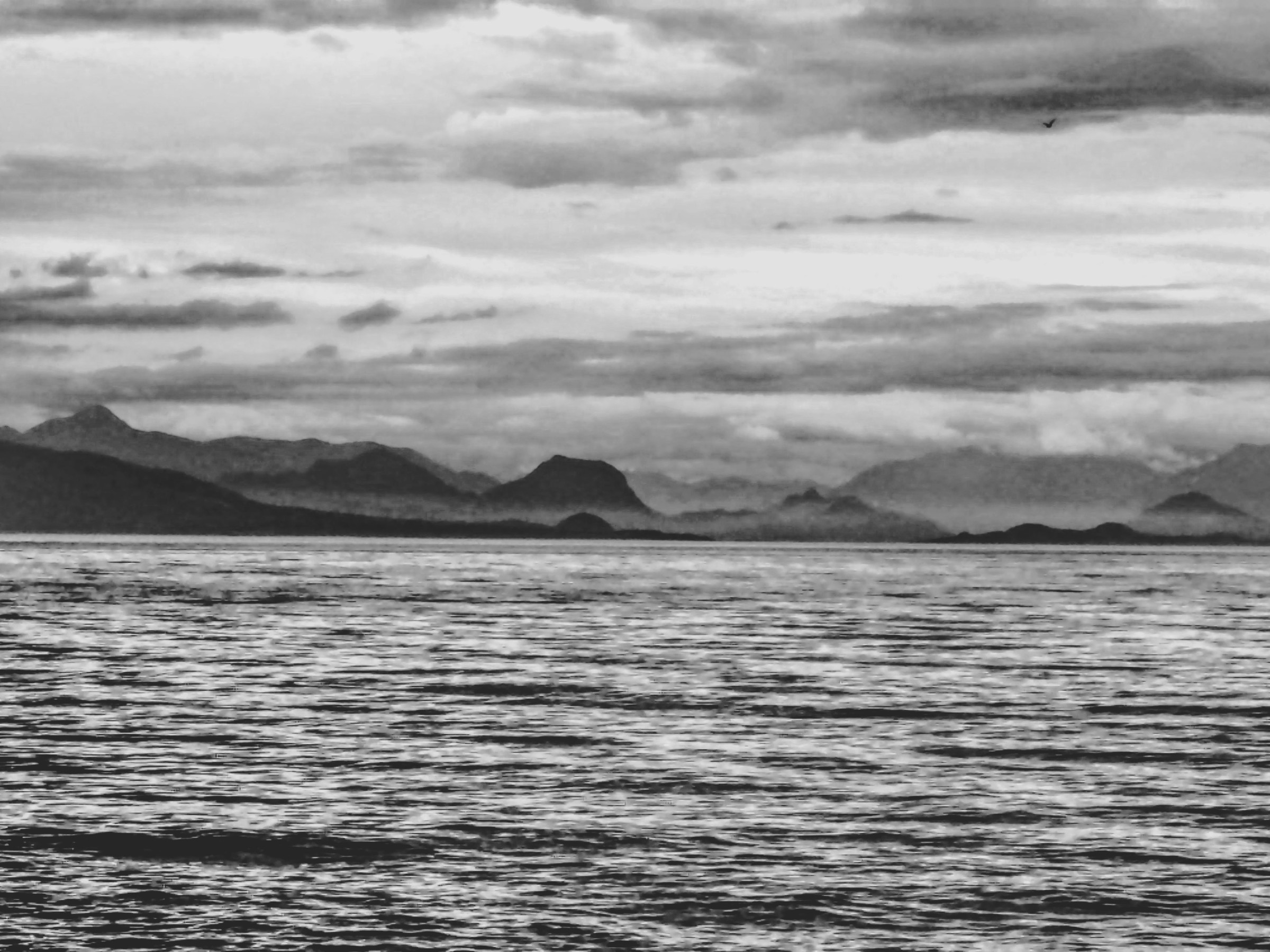 This past weekend, we held our housewarming party on Gabriola – and a fine time was had by all (more on that in a future post), but there was one incident that occurred on Saturday morning that has stayed with me and that I want to relay here before any of the details elude me (as memories fade almost as quickly as we make them).

Our housewarming party started on Friday afternoon and went straight through the weekend until Monday morning – with many old friends from my Victoria crew coming together and staying together the entire time. Of course this involved late nights and some staying up drinking. On the very first night, one of my guests left our downstairs cordless phone outside which drained its battery while we slept.

In the morning I saw the phone and brought it into the house, putting it on the kitchen counter with the intention of returning it to its cradle. I left it for a moment while I went upstairs to use the washroom, and a group of friends were standing around  the kitchen chatting. When I came back down, one of my friends said “your phone rang while you were upstairs” – something I hadn’t heard, because the upstairs phone hadn’t run (which in any normal circumstance it would have). Curious about who it was, I took the phone off the counter to see who had called. The first thing I noticed (before I saw the name) was that the phone looked as though it had been answered and the speaker setting was switched on (as indicated by the light). Odd, but dying batteries do weird things…… But even stranger was the fact that the call display showed a name only, no phone number, and it clearly read “Bronwyn Charman” –  the name of our friend who died just over two months ago in Berlin.

You might imagine, I was agog with the discovery, barely able to speak and so I turned the phone display towards three of my friends and said “Look at this – do you see what I see?” Two of them (Mel and Marika) immediately confirmed that they saw the same name on the call display (the other didn’t have his glasses) – but we noted afterwards that I did not prime any of them by telling them what I saw first – I asked them to verify the name cold, without prompting (not out of any design either, I couldn’t speak what I was seeing).

At this point the phone was still active and I was totally confused, so I ran upstairs to the other cordless phone which was sitting in its cradle. On that phone’s display was indicated “Line in Use” as though the line was activated. I sat on the edge of the bed then and said “Hello” into the phone a few times, but the line sounded dead. I picked up the other phone from its cradle and engaged it, and said hello again. After a few tries (I could hear my voice coming through the phone to the dead phone), both phones clicked off.

I immediately scrolled back through the caller display to verify what had happened. The dead phone wouldn’t bring up call display at all (the low battery symbol was flashing) and the other phone that was charged showed no record of the call coming in at all. (Later after I had charged the first phone (that the call came into), I could find no record of the call on that phone either. It was as though no call had come in all morning.)

At this point I was confused, and a bit upset. A few of us started working through possible explanations, wondering how it could have happened in a scientific-rational world but none of the answers we came up with made any sense (see below for more detail on that). It was at that point that a couple of our friends came in from outside where a group of them had been sitting around the patio table (the door between them and us was closed, so they hadn’t heard the commotion inside). We told them what had happened, and Masha asked – how long ago was this? I said – 10-15 minutes….. To which she answered, “Well that makes sense. We were just outside having a conversation about all the people we’ve lost over the last couple of years and how we could invite them all to the party even though they had passed over. We even named them – Bronwyn, Brian, Jesse….. and invited them to join us.”

Yup. That’s right. My friends were outside invoking the dead when our phone rang with the name of our dead friend on call display.

Let’s review a few other facts about this so that it’s clear there is no simple explanation:

Once the initial shock wore off, Kyla said “we better make an offering then,” and she and I put offering items together on the mantle in our living room, and said Buddhist words of loving kindness after a couple minutes of silence during which we focused on her release. Throughout the next day and night, other items were added to the offering, but I don’t believe that she left then or later. I had another moment in the night when I was singing a song that she had sung when we were in our early twenties – and I thought I felt something pass through me, had a bodily experience of what might have been her presence. That – I know – can be chalked up to any number of psychological factors. But the phone call, can not. As much as I would like it to be explained away, I cannot find an answer to this riddle, and I have witnesses to its occurrence.

Phone calls from the dead are a bit of a cliche but there you go – we do not choose the forms that visitations take. If anyone out there has an explanation for how this could have happened (beyond the fact that my group of friends are witches and we carry powerful energies when together) – please suggest away. Otherwise I’m going to have to accept that the friend we are all still grieving has not found her way out of this world just quite yet.

Super quick and fun holiday Monday project using studio remnants to make a little envelope bag to carry embroidery or other small hand sewing projects in. I've been looking for something to put that cross stitch patch on for years! #textilestudio #crossstitch #embroidery #sewing
I haven't been making much in the way of textiles lately due to some work-life stuff but I got in the studio this weekend and new ideas are percolating. #textilestudio #sewistsofinstagram #embroidery #letsseehowthisgoes
Pair Number 5 in my #year of socks. DK weight, pattern from @the_woolnest Sock Bible. #knitting #knittersofinstagram #textilestudio
A thing that I finished while watching tv on the couch this week. Pair number 4 of socks (for my sweetie). @biscotteyarns @the_woolnest #knittingallthethings #yearofsocks
One thing about being sick and on the couch is that I had some time to finish hand sewing the binding onto this quilt yesterday. I started this project 4 years ago, and it is finally bed ready! #quiltsofinstagram #quiltersofawesome #quiltinglove #textilestudio #textiledesign
I cleaned and tidied the pantry today, ordered more bulk canning lids for the season and pressure canned some chicken stock and some navy bean soup. Feeling really productive and ready for the real start of canning season in a couple of months! #canningseason #canning #pantrygoals #pantryorganization
What am I going to do with these? So many options! #quiltsofinstagram #quiltersofawesome #textilestudio
Finished hand binding this quilt today and now it's ready for use! #quiltsofinstagram #quiltersofawesome #textilestudio
Fabric for spring dresses to ward off the grey days. Plan to make two of the #rumidress by @christinehaynes with these jersey prints mailed to me by @threadcountfabrics this week. #isewmyownclothes #diywardrobe #sewistsofinstagram #textilestudio #sewcialists
Finally got something back on the loom. Weave structure is plaited twill on 8 shafts and fabric is destined to become towels with several different treadling patterns to keep things interesting. #weavingdesign #textilestudio #weaverfever #weaversofinstagram
Socks #3. Self striping yarn by @urthyarns , toe-up. Afterthought heel. I didn't really love cutting the waste-yarn to put in the heel, way too many things could go wrong there, but I managed to do it twice without any mishap except a dropped stitch. These ones are for me! #yearofsocks #knittingallthethings #sockknitting #knittersofinstagram #textilestudio
A return to knitting in bars! At the Gabriola Open Mic on a Monday night. #knitallthethings #knittersofinstagram #textilestudio #kniteverywhere