While there has been no sewing since earlier in the fall, airplane travel lends itself particularly well to knitting and crochet – so while I’ve been in the air, in hotels, and passengering in vehicles – lots of knitting has happened since the last thing I posted (The Beacon Shawl). The featured image is my current WIP which is a gift-in-the-making so I won’t tell you too much about that. Instead feast your eyes on the following finished projects (click for larger pictures):

The Cowls and Mitts are knit up in Malabrigo Arroyo, and the Hot Pad and Mitt use Galway Worsted and Chunky yarns. Looking for patterns?

Other projects on needles include the never-ending Paulie Sweater (which is just hours from being finished but I keep setting aside for quicker gifty projects), the gift project up above, and a second Imperial Hot Pad to use up the leftover yarn from the first. Once those are done I plan to do some steeking practice and then start Andrea Rangel’s latest version of the (Knitters) Dude Sweater for my husband, plus I’m going to make the Aspen Leggings for myself out of Briggs and Little. Oh! And I just bought the kit for this fabulous shawl (the Favorite Boots Sierras Polydactyl Set and Simee Dimeh Pattern) as well: 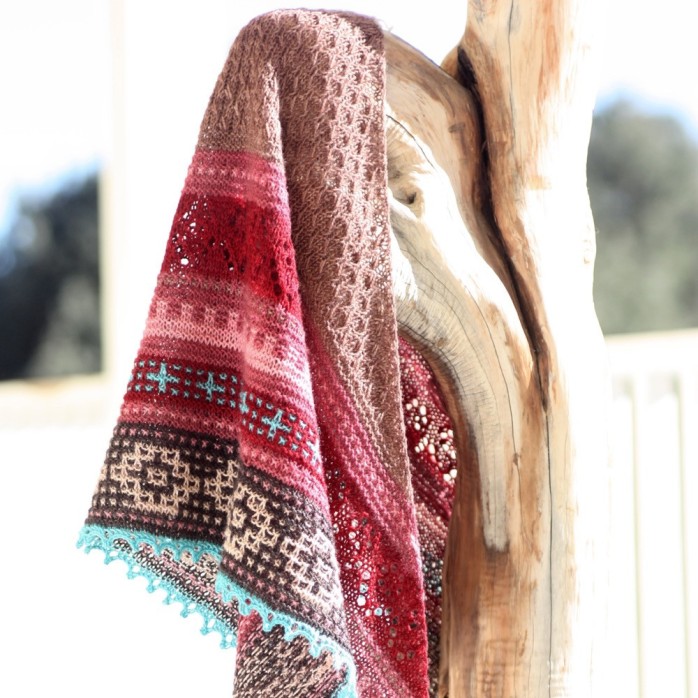 Looking at the pattern, this seems very advanced for me – but I’m game because it’s so stunning, and it gives me lots of practice in stitch variation. I’m planning for lots of lifelines as I go.

But before anything new is started, I vow to finish what’s on the needles right now. For real. That’s what I am going to do next.