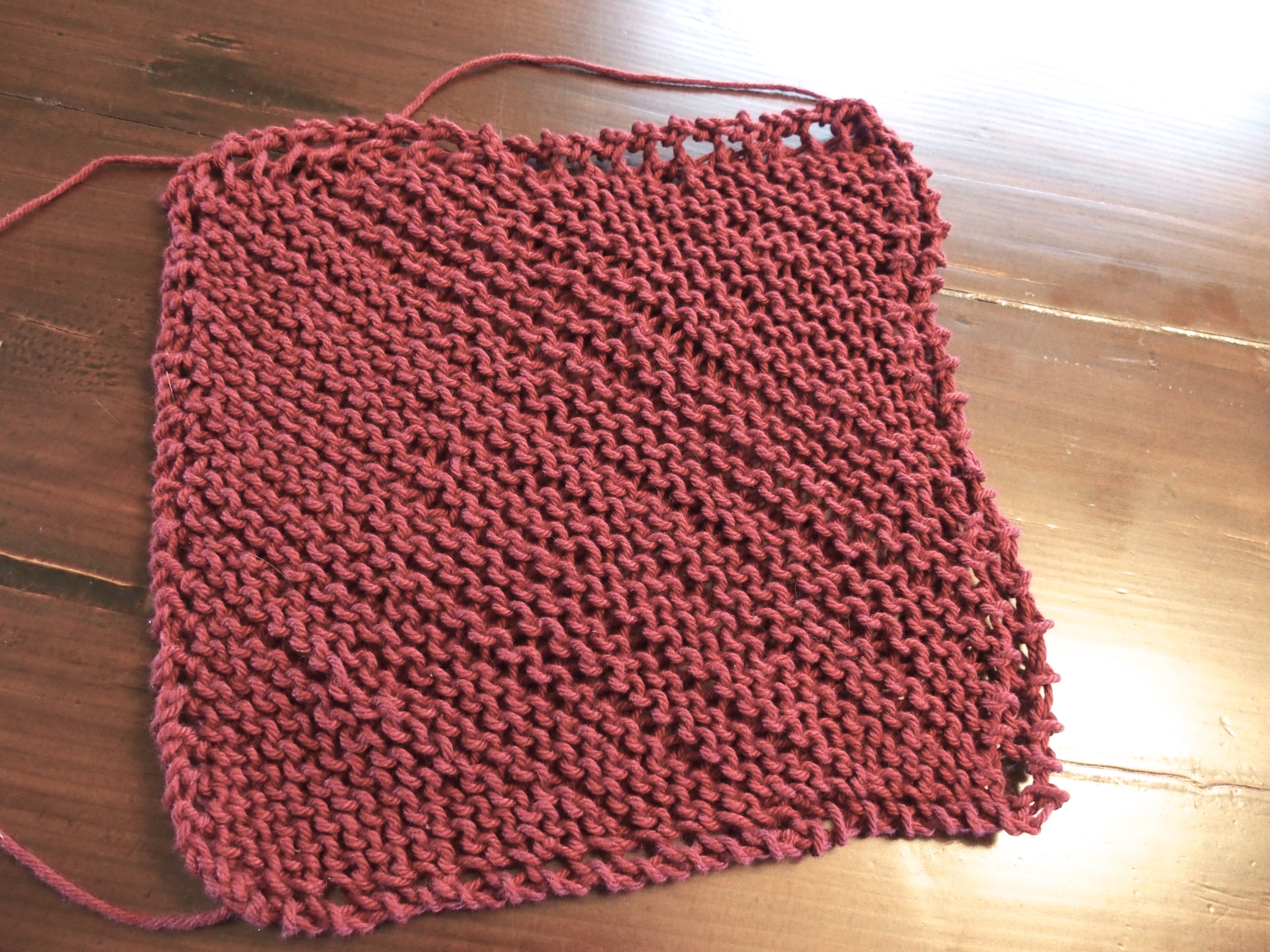 The photograph above represents my first ever knitted project – a dishcloth! I mean, a lopsided, mis-gauged, dishcloth – but whatever. I’ve never knitted before now other than a few feeble attempts to learn over the last few years.

To learn anything that involves technical skill (languages, woodworking, playing an instrument, sewing, knitting, etc) requires that one get at least a little bit obsessed during the learning phase – something that has been missing from my previous attempts to become a knitter. This time around I’ve got the bug for sure – I spent most of the day Saturday learning knit stitch and starting this dishcloth (several times), finished the dishcloth yesterday, and started another one on the bus today which has been ripped out to be started yet again this afternoon  (I’m working on getting gauge a bit more consistent before I move onto purl stitches). I think part of the reason that I feel like I’m getting it this time is because a knitting friend suggested to me that as someone who crochets, I might find continental knitting (where the yarn is held in the left hand) easier. This makes sense, and it also makes sense that crochet was initially easier for me to learn because I have strong left-hand dexterity from playing the fiddle all my life. I’m clearly right-handed, but my left hand works better for some things that require small muscle dexterity – grasping and tensioning yarn being one of those things.

Anyhow – I’m in the obsession stage of learning and that’s really what you need to get over the hump of making ugly things. For the record, here is the very first crocheted item I made four years ago – see any similarities between the two?

All you can really do at this point is move onto the next project (dishcloth) and hope it gets better. As I recall, the summer I learned to crochet, I made many, many dishcloths and then I made a horribly lopsided blanket out of non-washable wool yarn. So you know – we learn as we go. At least this time I am starting with a familiarity of yarn types and how to read patterns generally – that already makes this venture seem easier.

Looking at this picture of my first crochet is such a good reminder that we have to crawl before we can walk – but if one practices enough, the progress is inevitable. The key here is that we keep on doing something until it gets easier/more intelligible – and that’s the beginner’s hurdle. How much time and brain power do you have and how much does learning this new thing require? It’s not always the right time or place to acquire new skills (or make new habits or break old ones).

But right now feels like the right time to me – I’m also meditating more and reading novels again – which apparently means that post-degree I’ve got a whole lot more brain space for other things again.