It’s the end of summer and the dinginess of my office environment has finally gotten to me after ten years in the same damned cube. Ten years! (Fifteen at my job, ten in this building)

The federal government doesn’t really have much of a policy involving sprucing up workplaces beyond providing a carpet cleaning once a year. Hell! We don’t even get a deep clean of our office spaces – ever. Which makes for an accumulation of dust, stains and other assorted sads that cling to the fabric cube walls like the very essence of work itself.

So I’m going to do something which is pretty much unheard of in the environment I work in – I’m going to decorate my cube beyond putting up a new poster or two. I’m going to get an area rug! A new chair for the visitors (that isn’t a derelict rolling office chair)! A covering for the seventies bookshelf that looks like it was made in a prison (it was, too – thanks CorCan)! 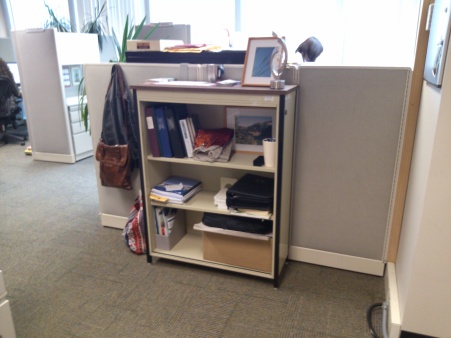 Of course I can’t do it all at once because I only have so much money and time — so consider the above my before pictures – and as I go I will post in-progress and “after” pictures. I would really like to cover the beige cube walls with a coloured fabric in addition to some other smaller projects – but I’m not sure yet as that would be somewhat costly and it may turn out that some smaller fixes make the space more livable. Today’s project is to affix some stickable “wall art” to the overhead cabinet (on sale at Rona yesterday for only $5) – and to peruse the office supply shop across the street for something to replace the ugly plastic tray that serves as my in basket. Start small – work big, right?

← Friday afternoon: Time for a little outhouse story (with pictures!)
Building a Woodshed: A picture story →