A penny for your…. prediction 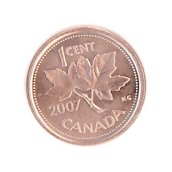 A passing prediction on the demise of the penny announced in yesterday’s budget (and yes, I have done my share of handwringing over that budget already):

Though I care little about the Canadian penny’s death, I think it should be recognized as the hidden transfer to business that it is- particularly brick and mortar business which still offer cash transactions.

Since taxes in Canada are percentage-based, it is rare to see a cash-register ring up an even number. HST, GST, whatever… if it costs $1.00 in store price, it costs $1.12 at the register. Without the penny, how will change get made?

Obviously a shop isn’t going to round down on transactions, particularly for small business that could really hurt them because they would fall short on their tax-remittance to the government at the end of the year. So that leaves round-up as the only real option – which means if something comes to $5.11 the consumer will pay $5.15 and the 4 cent difference will go to the business.

Because that will seem unfair to the consumer at the till, I believe Canada will shortly move to after-tax pricing which both hides the tax rate, and the fact that the business is charging more than goods + tax cost will also be hidden. Some people prefer after-tax pricing, some people hate it – I’m ambivalent myself – but the fact remains that this scheme gives business the chance on some transactions to make as much as an extra 4 cents.

As a consumer, I’m really not too fussed about an extra 4 cents on a bag of groceries – but as a taxpayer, I am concerned that the government isn’t being more transparent about the implications of eliminating the penny in a percentage-based tax system. It certainly opens the door for another wealth transfer, one that doesn’t do much for the small business, but does an awful lot for the retail giants who are already advantaged in our cheap-good-loving society.

I've decided to sell this little loom. It's a 4 shaft J-made table loom with floor loom conversion kit (6 treadles) and 22 inches of weaving width. It was loaned out to a friend for awhile but then I got it back and thought I'd weave on it a bit and see if it was a keeper. While it weaves just fine, I really do prefer my two countermarch looms and so out this will go. Fingers crossed on a quick sale but I'm not counting on it.
Sewing plan for this week: Start work on a lined winter coat using the #talvneckcoat pattern. Fabric is a wool coating from @blackbirdfabrics. I have a bad track record with finishing lined coats. I am hopeful this time that I will get through the process given that @theassemblylineshop make such great patterns. Fabrics are cut! #isewmyownclothes #diywardrobe #sewingmachine #sewingproject #sewistsofinstagram
That moment when you notice the threading error. #weaversofinstagram #weaverfever #weavingdesign #texilestudio
I bought this chair at the recycling centre for $8 this summer and recently brought it into my studio where it sits near my work desk. I like to retreat to it during long online meetings when I don't have to be at my keyboard. I also take reading breaks during the day when the work gets overwhelming. This morning I've got some Anne Lamott on the go and I'm thinking about how to courageously write what is true. I've posted some of my thoughts on that over at my blog red-cedar.ca and I wonder how many of you out there can relate to a fear of being authentic on social media or in your creative work? #texilestudio #writinglife #creativegood #writingcommunityofinstagram #writersofinstagram
The missing majority is all the stuff that disappears... the food, textiles, basketry, wooden objects and other organic materials that form a significant part of human experience, and almost none of our prehistoric record. I've been thinking about the lives of objects lately, how even in literate culture, we lose our own history of things by overlooking them until they fall into disuse. Hurcombe's work is one attempt to insert this stuff of everyday life back into our understanding of human history, something of interest to textile makers and craftspeople of all kinds. #textilestudio #anthropology #prehistory #ancienttextiles
Knitting with some of the yarns I dyed this summer while sitting in my car on the ferry. Love the depth of tones in these yarns. #texilestudio #kniteverywhere #knittersofinstagram #naturaldyeing #indigodye
Hard to believe that these yarn chains will become a piece of fabric.#weaversofinstagram #textilestudio #handweaving #handmadelife #iweavemyowncloth
Got a big reset on my life this week with a little retreat on Saturna Island. I blogged about it today at red-cedar.ca ... first time in nearly a month since I posted there!
This frieze at the #Saturnaisland Heritage Centre in the old foghorn building at Eastpoint was discovered during renovations a few years ago. Painted by a lightkeeper in an earlier era, it speaks of the need to make marks on long stretches of time spent in bad weather.
New table runner and autumn flowers.
Fall altar. #zenbuddhism #zendo #practiceperiod
Quite pleased with how this is weaving up, even though I managed to do my tie-up upside down so the right side of the fabric is underneath (see second picture). Just means I have to be extra careful as I go, and check the underside often. So happy to have figured out how to best warp and tie-up this #bergåsavonia loom though. I can see it's going to be in my life for a long time. #weavingloom #weaverfever #weaversofinstagram #textilestudio