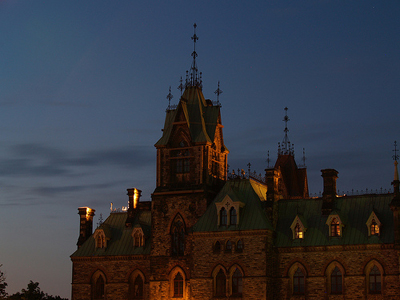 Autumn not quite frost, some hot days still promised before the dark snaps shut bringing rain to cleanse the dust of summer. Almost, and then not quite another year. At least the flags are not flying half-masted on this trip. This city, a reminder of nationhood in a way Vancouver is not. Military, civilian, citizen to and fro as though the country depends on these orderly streets and politenesses. Flat landscape and river channeled into a picturesque canal – nothing left unbound – no foreboding rock to close off distance. This location chosen precisely for its lawful possibilities, no place for civic unrest to hide, a city onto which an emergency plan is easy to impose.

It is not that I hate it here, for it is an easy city to find oneself alone and wandering. Safe in its well-lit costume of civility while only scant hours away lie the crucial heartbeats, the edgier towns of Montreal and Toronto.

People here are not afraid of their streets, making eye contact with the surety they will not be asked for change or accidentally shot. A jovial judgement in each eye knowing so many here are temporary on any given day. The town where one comes to do business before returning to the messier world of home. There is so much well paid work here and housing, it is easy to see exactly what government money can buy. So different from the US counterpart of DC which contains still a large and ragged population of those without.

It is both comforting and banal, where the history of a country carved from wild is contained in museums rather than contested. It was taken so much longer ago then where I’m from, a river valley paved and overbuilt with gothic architecture. The country sprawls outwards from here, thankfully some of it barely touched by the petty pens of decision-makers. But still, it is this which which wishes to imprint on every rock and tree. Turn lakes into tailing ponds and rushing rivers into energy controlled by a hand on a switch.

There are many ways, of course, to take a place to mind. Many impressions contained within this one. And still I have to hold back a laugh when my friends here tell me about the dangerous parts of downtown. The worst enemy here is not more than boredom or bad food.

2 Comments on “Ottawa. A one-sided sketch.”